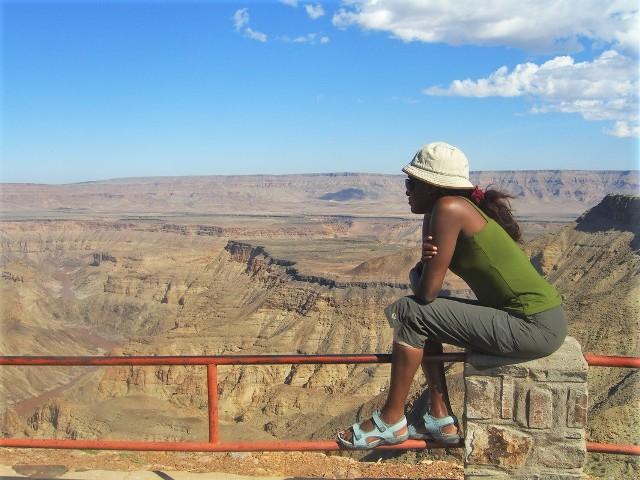 Maskarm Haile is a confessed travel addict and a lover of the world's cultures, foods, and people. She also takes an avid interest in self-discovery and the captivating stories she encounters throughout her journeys across the world.

Her love of travel began when young Maskarm accompanied her mother across Ethiopia on a humanitarian mission.

Growing up among children with diverse backgrounds also fueled her travel passion further.

Maskarm's dedication to being a travel junkie was apparent ever since she was just a small child.

This caused her well intentioned traditionalist and conservative relatives to worry over her. But this never swayed Maskarm, she always felt that her "big dream" of travelling the world was a gift from God and that it was a secret she held close to her heart.

How this Pioneering Journey Began

What happens when a woman from Ethiopia finds herself dreaming of traveling the world, in particular overland across Africa?

Maskarm's secret dreams of travelling made her feel like an outcast in the traditionalist society she was brought up in.

Her choice of being unmarried and in her thirties was already an issue that was unconventional.

Maskarm's life became even more taxing by the discovery of her mother's cancer diagnosis.

She was at a crossroads in her life that offered her different possibilities; from losing her mother to the illness to fixing her relationship to following her dream or even losing her life.

While under the weight of all these possibilities, Maskarm was given a sign. This beacon of light came in the form of a book written by Ffyiona Campbell, entitled On Foot through Africa.

Her mind made up, Maskarm received the much needed support from her friends and even her dear and ailing mother.

Her daring plans to traverse across Africa, solo, were a cause of bewilderment and shock to many.

This was when Maskarm realized that what she had chosen to undertake was as radical, as it was revolutionary for all black women, the world over.

With this, the brave traveler Maskarm, began her journey across Africa starting at the Cape of Good Hope, the southernmost part of the continent.

The Book: Abyssinian Nomad in Africa

Maskaram's trip through Africa turned out to be a story of love, adventure and loss.

She wrote a book entitled "Abyssinian Nomad in Africa" to share her experiences with everyone, especially, those that have unfulfilled dreams.

In this book, Maskarm proves that you can accomplish your dreams, despite your economic background.

She defied all expectations, as a young African woman, and through a determination bordering on obsession, made her solo trip from Cape Town to Cairo.

In this awe inspiring book, author Maskarm Haile shares with us:

*Her experiences travelling across Africa as a solo African female

*How African societies view a woman in her thirties, unmarried with no children

and most important to Maskarm...

*How the kindness of strangers gave her the strength and inspiration to endure throughout this heroic journey of a solo African woman crossing the continent.

This brave woman is not finished yet; in the near future, she plans to begin work on her new book about travelling around the world.

Connect with Maskarm Haile through her email address [email protected], or through her websites http://www.maskarmhaile.com and http://abyssiniannomad.com.

10 of the Best Visa Free Countries for Ethiopians