What is the Ethiopian Soursop or Ambashok?

The soursop fruit is also known around the world as graviola, gunabana, annon muricato, guyabano, and in Ethiopia as ambashok (shok in Amharic meaning prickly).

The origins of the evergreen tree in which the soursop grows is native to tropical regions of the Carribean, the Americas and Africa namely in Ethiopia's Harar and Dire Dawa cities located in the eastern part of the country.

The soursop or graviola fruit has become somewhat popular today for all its incredible health benefits and not to mention its enjoyable taste. We have prepared the following 10 interesting facts about the soursop or ambashok fruit which is found in Ethiopia.

1. The Bark, the Leaves and the Root

In some parts of Africa and South America the people are known to use the root, leaves and bark of the soursop tree to treat parasites, infections, depression, arthritis, and rheumatism. Extracts from the graviola are known to help treat these ailments. 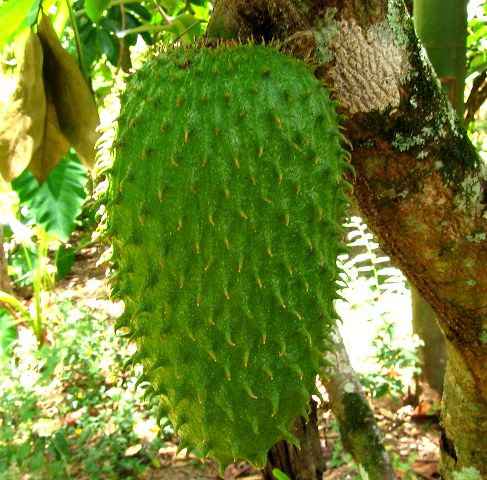 The soursop fruit is prickly in that it has a green surface covered with dull thorny and protruding shapes.

3. The Graviola Aroma, Flavor and Texture

This wonderful fruit is often said to have an aroma comparable to that of the pineapple. The flavor or taste, on the other hand is more often than not compared with the apple, strawberry, and citrus fruits combined.

The fruit is usually called soursop because of its somewhat acidic taste when fully ripe.

Graviola's insides have a creamy white texture similar to the coconut and banana with large black seeds spread out within the fruit.

4. How to Eat the Ambashok Fruit

The ambashok is usually eaten in its raw form by cutting the fruit in half and scooping out the meat or creamy flesh within. The ambashok can grow quite large making it a wise choice to cut up the fruit into smaller pieces.

Interestingly enough, in the country of Indonesia, a sweet meat is made using the ambasok. They call it dodol sirsak, and is prepared by boiling the ambashok pulp in water and adding sugar until it hardens.

In the Caribbeans they use the unripe ambashok fruits, sliced and marinated as a vegan fish free substitute cuisine.

5. The Soursop's Vitamins and Minerals

Even though a normal serving of the soursop is high in useful nutrients it is interestingly enough low in calories.

100 gram or 3.5 ounce serving of the soursop contains:

The soursop fruit is also known to contain a minor amount of iron, folate, riboflavin and niacin.

6. The Soursop, Laboratories, and Cancer

Laboratory studies conducted revealed that extracts originating from the graviola are capable of killing certain types of breast and liver cancer cells, especially those that were found to be resistant to some chemotherapy drugs.

Recent laboratory tests proved that the extract of the graviola pulp also had a positive effect against prostate cancer cells on mice.

Several animal and test-tube studies have even discovered that the soursop may aid with everything from lessening inflammation to slowing cancer cell growth.

7. Temperatures to Grow the Soursop

The graviola tree is best adapted to areas of somewhat warm winters with high levels of humidity.

If growing temperatures reach below 5 degrees Celsius or 41 degrees Fahrenheit the graviola tree will have damage to its leaves, as well as, be endowed with small branches.

Temperatures hitting below 3 degree Celsius or 37 degrees Fahrenheit, could prove fatal to the tree and cause the fruit to become dry and not suitable for human consumption.

Many people are now talking about the many benefits associated to the soursop fruit and this is mostly because of its high levels of antioxidants.

Antioxidants are compounds that assist in neutralizing harmful compounds called free radicals, which are known for causing damage to cells.

Research shows that antioxidants in soursop may play a large role in reducing the risk of several diseases, such as cancer, heart disease, diabetes, and cancer.

A recent test tube study focused on the antioxidant properties of the soursop graviola fruit and found that it was capable of effectively protecting against most damage caused by harmful free radicals.

Further studies using test tube studies, measured the level of antioxidants in a soursop extract and revealed that it assisted in preventing damage to cells.

The Ethiopian soursop or the graviola also contained several plant compounds that act as antioxidants, namely, tangeretin, luteolin, and quercetin.

Soursop has been known throughout the ages for its exceptional medicinal value.

Soursop leaves can be used to make tea, which in turn is highly beneficial for your health, not to mention it being conveniently ready in a tea form.

Research has documented that the leaves, stem and bark of the tree have proven highly beneficial to users. This graviola tea is popular for its soothing and calming effects, causing it to be widely spoken of and admired.

10. People From Countries All Over the World Love Soursop

a. Natives of the Caribbean and sub-tropical countries have used the leaves, stems and bark of the Sour Sop tree as a medicinal home remedy for more than a century.

b. In Colombia, Mexico, Venezuela and the eastern parts of Ethiopia, soursop is a common fruit, often used for dessert after a meal or as an "agua fresca" or to make juices that are sometimes mixed with milk.

c. In Cuba, a thick smoothie known as "champola" is made out of soursop pulp, milk and sugar cane.

d. Interestingly enough, in the country of Indonesia, a sweet meat is made using the ambashok fruit. They call it dodol sirsak, and it is prepared by boiling the ambashok pulp in water and adding sugar until it hardens.

e. In the Asian country of Vietnam, soursop, graviola or ambashok is known as "mang cau xiem," in the south, or "mang cau," in the north, and is used to make thick juices or just eaten as is.

g. In Malaysia, graviola is known in the Malay language as "durian belanda" and in the eastern part of Malaysia, specifically among the Dusun people of Sabah, it is known as "lampun."