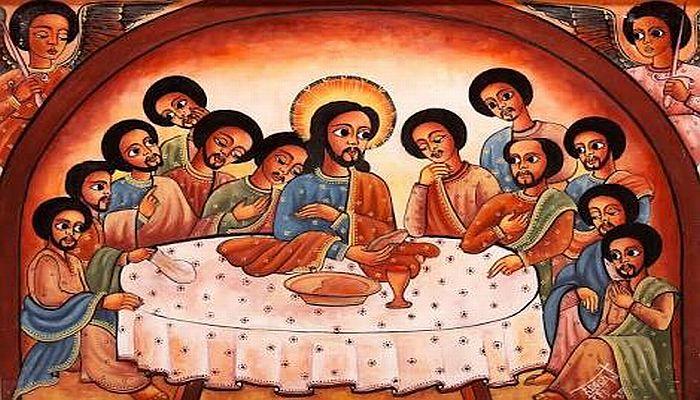 Christian Ethiopian painting's flourished for over a thousand years in the churches and monasteries of highland Axum through to Abyssinia and modern day Ethiopia .

The advent of Ethiopian paintings is believed to have begun during the time Christianity first made its presence felt within the Axum Empire in the 4th century AD.

The Ethiopian Garima Gospels from the 4th-6th centuries AD contain illuminated manuscripts that predate the oldest known church paintings which were found in the 11th century AD church of Debre Selam Mikael in the area of the Axum civilization or today's Tigray region.

Ethiopian paintings in manuscripts, on walls, and on icons are very unique but also have a touch of influence from the simplified Coptic versions of the Byzantine and Late Antique Christian arts.

The simplistic style belies a vivid portrayal of the subject which is mostly religious in nature.

Seemingly cartoonish figures with large oval shaped eyes and bright colors are characteristics of paintings from this time period.

Beginning from the 15th century, the Saint Mary or the Virgin Mary began to become extremely popular in lives of Ethiopians and this was evidenced in the increase in paintings dedicated to her.

The Virgin Mary was depicted with or without her Child, and a variety of Byzantine styles were employed, largely the painting with two archangels on both sides of the Virgin Mary or with Saint George on his horse fighting the dragon.

By the 16th century, the Roman Catholic Church and its art seem to have influenced Ethiopian paintings.

Despite the influence, the art has managed to stay conservative and retain the majority of its unique styles.

Prior to the 19th century, churches were known to be fully painted, but non-religious scenes or characters were lacking.

Soon church donors and their lives began to be depicted in the paintings.

The beginning of the 20th century brought forth a new kind of artistic representation.

The forerunners for this new art were the church-trained dissident painters, and other self-taught artists who received some commission for their work.

These artists, along with those who got their art education in Ethiopia and Europe in 1920's and 1930's, brought about a new practice in the visual arts culture in modern Ethiopia.

By the 1940's, this new class of painters were being hired by the government and recognized as professionals. And by the 1950's, the number of painters, those coming from abroad with a new artistic style grew steadily.

The graduates of the Addis Ababa Fine Art School followed this in the 1960's, resulting in three main artistic movements that remained popular until 1974 when the Ethiopian revolution broke out.

First is the realistic or naturalistic and "naive" style used to represent Ethiopian passion and glamour. Like most Ethiopian literature and the music of the time, the subject matter of the paintings was based on a new reality - Nationalism.

Second is Abstractionism, Expressionism and Surrealism; the examination of spirituality in the style of the Western avant-garde movement, which, in most instances was an assertion of Ethiopian and African identity through the visual arts.

The third is an Impressionist, Expressionist or Social-Realistic style.

Intended to be sentimental and political in nature, it depicted the cluttered shabby streets of the cities, urban scenes and the downtrodden masses.

These three main artistic trends coexisted until the overthrow of the emperor in 1974.

In 1977, when the country mobilized its professionals for a new cause, the newly amended Ethiopian Artists Association organized a show at Addis Ababa City Hall Gallery.

It was intended to be the annual exhibition of the Ethiopian Artists Association. It was also to show the solidarity of Ethiopian artists with the "Ethiopia First" slogan of the Derg.

There was no indication at the show of a new style or artistic expression per se.

The Paintings and Sculptures displayed portrayed basically the same subject matter as before, and were produced by the same artists.

The works concentrated more on the famine, the revolution and rural life in a simplistic narrative manner.

Soon after, the revolution changed its course and the military government of socialist Ethiopia systematically recruited and trained artists for propaganda and other political purposes.

The militants who believed that art would help advance the cause of educating the masses advocated for Socialist Realism, an artistic language that would simplify the complexity of the country and her people.

This new artistic style dominated the artistic scene of the country in the 1980's.

Today, the artistic practices of the late 1970's and 1980's seem to have all but disappeared.

However, since the new generation of artists are influenced by the country's tumultuous past, doubts linger as to what to do and how to define it.

Themes, techniques and subject matter repeat themselves in endless yet lively variation in an attempt to gain approval and recognition.

The desire to match the artistic efforts of the past; to make up for the time wasted, is so onerous that many artists sought comfort and reassurance within the arts community.

Since 1993, the silence of the Ethiopian Artists Association has forced many young artists to defend their profession on their own.

Artists groups are sprouting up as never before.

These groups are not specifically formed to promote one type of art style, approach or artistic philosophy.

Instead, they are alliances of artists who have something in common - social problems and conditions that tend to discourage artistic activities.

Without sacrificing their individuality, they hope to become more visible as a group in order to approach cultural centers, and institutions for assistance and sponsorship of exhibitions.

They also hope to be taken seriously in their attempt to teach the general public about art.

Among the many artists group formed in the last seven years, the most visible are the Friendship of Women Artists (FOWA), Point and Dimension groups and Addis International.

Addis International which was one of the first groups to be formed, organized a show of the works of about 40 artists in 1991, but has since curtailed its activities while newcomers like the Double Blue group are becoming increasingly active.

In the 1960's and early 1970's, most works by graduates of the Addis Ababa Fine Arts School portray the social condition of the country. Whatever its style and technique, it was art based on social commentary.

At present, with circumstances worsening, this kind of thematic is making a comeback.

The trauma, crisis, spiritual illness, and the painful reality of the country's past and present are subjects of interest to a large number of artists.

Members of the artists groups, as well as more established individual artists, are regularly exhibiting in a fashion that is reminiscent of the gregarious artistic activities of Addis Ababa in the 1960's and 1970's.

This rejuvenated art scene has taken on an international flavor with the exhibitions of expatriate artists and Ethiopian artists living abroad. 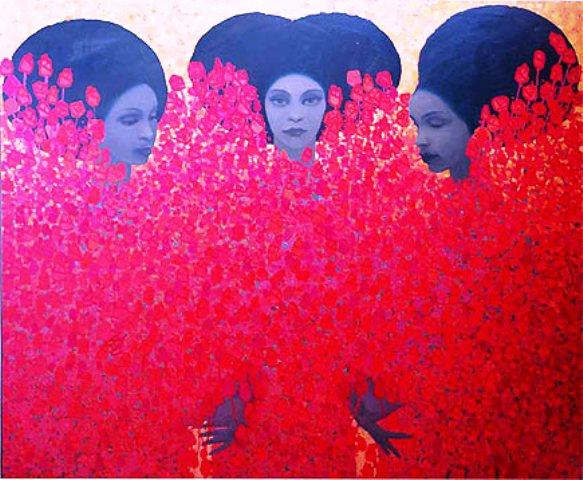 A number of new art galleries dedicated to contemporary art, coupled with an enthusiastic group of new art collectors, is once again turning Addis into an important art center.

Esseye Medhin There are various budding artists and galleries on the scene of late, such as http://www.yisehakfinearts.com/ but the most prominent is Ethiopia's traditional religious art.