10 of the Best Ethiopian Traditional Sports and Games 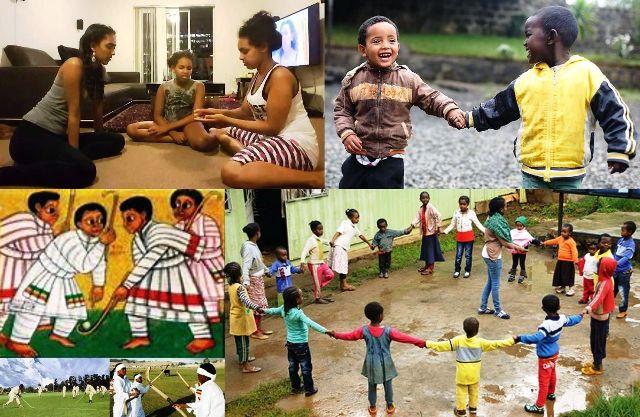 Ethiopia, a country with a history and culture dating back thousands of years, has yet to have its past fully documented and understood.

Sporting events and games are an integral part of society and by embracing them one will be able to build an important link to the past.

At the moment, there now exist over 293 registered traditional and cultural sports and games in Ethiopia.

It is dated to between the 6th and 7th century AD during the time of the powerful Aksumite Kingdom and was found in the form of pieces of a pottery board with several rock cuts.

In the 14th century, Giyorgis of Segla who wrote the "Mysteries of Heaven and Earth" in Ge'ez, mentions the word "qarqis", which is a Ge'ez word referring to both the Gebeta and Senteraj board games.

It is widely believed that Gebeta, commonly referred to as Mancala is one of the oldest board games in history.

The following are just 10 of the many traditional and cultural sports and games that exist in Ethiopia across all its ethnicities and regions. 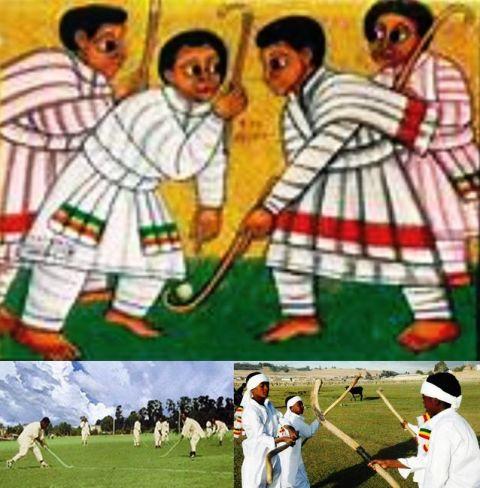 Gena (ገና) or qarsa (ቃርሳ) is a traditional sporting game created and played in the highlands of Ethiopia; the game bears many similarities with modern day field hockey.

The game is usually played in a wide open area located between two towns, yet the game area has no official boundaries.

The 2 opposing teams try to throw a ball made of wood in the air and attempt to hit it with their sticks, all done to prevent the other team from bringing the wooden ball to their town.

The game received its name from the Christmas celebrations called Gena, proving their association.

Gena is believed to be good for the body, mind and spirit, as it initiates healthy competition between towns, neighbors, and family members.

It facilitates a strong feeling of bonding and friendship, not only on a local level but also in a national way.

Considered the oldest board games in the world, Gebeta, known widely as Mancala is a game that is lauded for its entertainment value.

Gebet'a was once a popular game in Ethiopia, among both adults and children, largely due to it not requiring any complicated equipment.

Until recently, many children were seen outdoors in public areas playing this type of game, although now it is unfortunately being phased out and being replaced with electronic devices.

Equipment is typically a board made from a variety of materials, such as wood, stone, or just simply digging holes in the earth.

Typically the holes are set in rows of 2 or 4 with the large holes on the ends of the board, being the place used for holding the pieces.

Playing pieces used are usually seeds, beans, stones, cowry shells, or any other small objects that are put in and moved about the holes during play.

With a 2-row board, the players control their sides of the board, with moves made into the opponent's side.

With a 4-row board, the players control an inner row and an outer row, and a player's seeds will remain in these closest two rows unless the opponent captures them.

Although, there might be some variance, the main object is usually to capture more seeds than the opponent.

At times, one seeks to leave the opponent with no legal move left or to have their side empty first in order to win.

In a process known as sowing, all the seeds from a hole are dropped one at a time into successive holes, in a motion covering the board.

Sowing is a suitable name for this move, since not only are many games traditionally played with seeds, but placing seeds one at a time in different holes reflects the physical act of sowing, showing its link to its agricultural past.

At the beginning of a player's turn, they choose a hole with seeds that will be sown around the board.

This selection is often limited to holes on the current player's side of the board, as well as holes with a certain minimum number of seeds.

If the sowing action stops after dropping the last seed, the game is considered a single lap game.

Lamlameta, meaning "in couples", is a cultural game created and played by the Konso people of Ethiopia. They live in the central part of the country, in the Olanta area.

The game is a close relative of the Gebeta and Mancala board games.

The board used is called a "toma tagega" and is made up of two rows of twelve pits or "awa" each.

The game begins with 2 seeds (tagega) being put into each pit.

A player will take all the seeds from one of his pits and relay sow them in a counterclockwise way, with the first move usually being to transfer from one of the 2 rightmost pits.

One exception associated only with the opening move: all succeeding sowings of any opponents pit holdings with exactly 2 seeds being skipped.

A players turn ends when the last seed of a sowing is placed in an empty pit. If the pit is in their row, and the opposite pit which is in the opponent's row contains exactly 2 seeds, then a capture has occurred.

With this, all the opponents’ seeds in any pit with 2 seeds are removed from the board game.

It is game over when one of the players has no more seeds left, in which case, the opponent captures all the seeds that are on the board. The winner owns the most seeds. 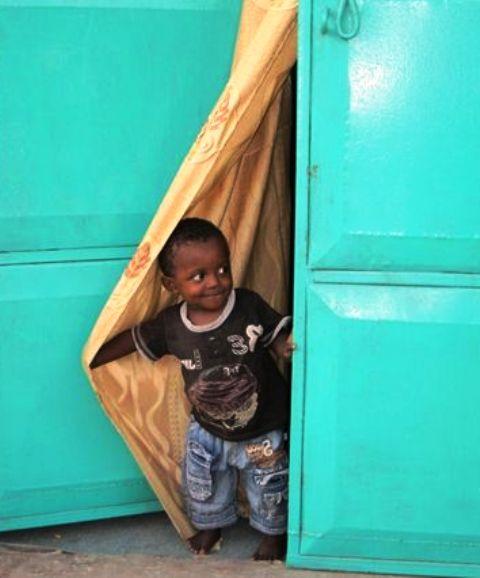 This traditional Ethiopian game can be described as a variant of the well known "hide and seek" game, with about 6-15 people participating.

The game begins when one (the seeker) in a group stares at a wall (known as his/her house, home base, or the Mariam), avoiding eye contact with the others.

The others in the meantime, have to find hiding places.

After a while, the seeker on the wall will begin to make the "coocoolu" sound, imitating the sound hens make in the morning.

The others attempting to hide will reply "alnegam" or it is not morning yet, implying that the hen (seeker) should not leave his/her house.

The seeker will continue to make the sound till everyone in the group trying to hide has hidden themselves and start to reply "nega" or the sun has risen.

At this point, the seeker will actively attempt to find those in the group that are now hidden.

In the meantime, the hidden have to make it stealthily to the seeker's wall or "home" and place their hand on it and kiss their hand. This makes them safe.

The seeker will have to find the hidden before they reach the wall, and call out their name and go to his wall "home" and touch the wall while kissing his hand.

If the seeker arrives before the hidden whose name was called out, then the hidden will be "captured", and remain waiting at the seeker's wall.

The winners are those that make it safely to the wall.

Demo, later named Pepsi, is a traditional game played in Ethiopia. The game has two opposing teams, one chasing the other with a ball, while the other attempting to escape and collect corks.

In the past, the game was called Demo but changed when the Derg regime came into power.

The regime believed that the word Demo was too closely associated with the EPRP or Ethiopian People's Revolutionary Party's political publication called Democracia.

Aside from its entertainment value, Demo is believed to help build fundamental skills needed in one’s formative years, such as interacting with others and building physical acumen. 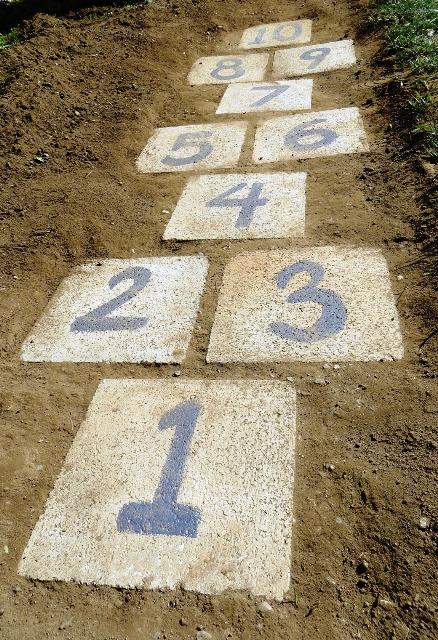 Segno Maksegno or "Monday Tuesday" is a traditional Ethiopian game that is a variant of the widely known hopscotch game.

One plays the game by first drawing lines on the ground, usually with chalk or just lines in the dirt. They are separated by approximately 40cm.

Each box drawn represents a “home”, which can be appropriated as property with ownership.

The game begins by one person in a group throwing the first stone into the collection of "homes".

The person will have to successfully jump through the collection of "homes" without touching the "home" with the stone.

If done properly, the same player will continue to go through all the "homes", if still successful throughout they will be able to choose one of the "homes" to "own".

Owning a "home" means that only that person can touch/jump on it, and no one else.

If one of the parts is divided in the middle, the person can jump with both feet, but if not, then would have to use only one foot.

If a person cannot jump through the area, then they will have forfeited their turn and will start the next game.

If a person cannot throw the stone in the correct place, i.e. within the real estate, they too will have forfeited their turn.

The jumps made are two ways, they have to go forth and return, and owning a "house" means they can jump with one or two feet on it.

Owning a "house" also entitles the person to write their name or any other such sign they wish.

The game ends only when one of the players owns all the houses or when the positioning of the house ownership makes it impossible to jump successfully anymore.

Kebeto is a traditional Ethiopian game, which is a close variant of the "duck-duck-goose" game played elsewhere.

The game begins when at the least four people form a circle, in which one is chosen to be the passer of the belt.

This person will hide the belt behind one of the people in the circle. This is done without letting anyone else in the circle know.

If the belt passer makes it back to the open spot in the circle without being caught he/she will be safe. 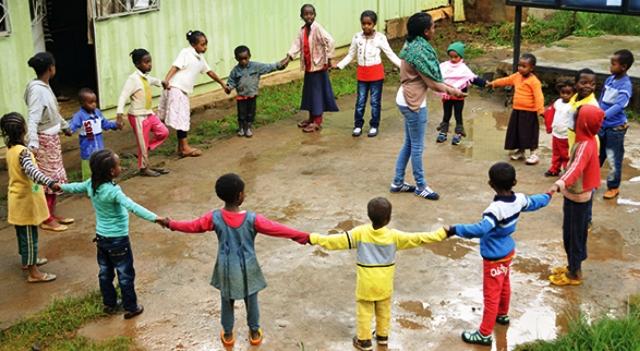 Awo Aydelem is a traditional Ethiopian game that can be played by many people, as long as a questioner is chosen.

It is also a variant of the popular "Simon says" game played elsewhere.

The questioner will try to make everyone say yes "awo", but the answerer has to try to not say yes.

In effect, the winner will say "aydelem" or no to the questioner's questions.

It is a game that takes focus and concentration to win.

It is a game mostly played by girls and is considered an important traditional method of teaching discipline, social skills, and focus.

It also helps to teach those playing how to count numbers, employing the use of several rocks in the game.

Kelebosh players start by attempting to throw the rocks randomly, as the more spread out they are the more difficult it is to play.

The number of the rocks in the game has to be an odd number, such as 5 or 7.

Arenguade or Green is a traditional Ethiopian song singing game.

Leba Ena Police or Thief and Police is a traditional variant of the popular "cops and robbers" game.

Biy or marbles is a traditional game played using marbles.