Emperor Menelik II of Ethiopia was considered even more effective than Tewodros II, as Ethiopia's great modernizer and unifier.

He was born in the kingdom of Shewa in central Ethiopia and eventually became King Menelik of that region.

Before long, though, then-emperor Tewodros II conquered Shewa and imprisoned Menelik in his mountain stronghold at Magdala.

With the help of some close allies, however, King Menelik engineered a daring escape from Magdala on the night of July 1, 1865 and returned to Shewa, where he defeated a usurper and recovered his kingship.

After Tewodros II's successor Yohannes died at the Battle of Gallabat, King Menelik claimed legitimacy for his bloodline and vied against Yohannes' son for the empire.

King Menelik successfully ousted Yohannes' son after gaining the support of the majority of the Ethiopian nobility and became emperor.

He immediately received a baptism of fire, though, when Italy invaded Ethiopia after a treaty dispute.

But in this crisis lay opportunity, and after pulling through it and routing the Italians at Adwa with the help of Ras Alula, Emperor Menelik and Ethiopia enjoyed a new era of prosperity and power.

He moved the capital to Addis Ababa in his home region of Shewa.

He brought hospitals, telephones, electricity, modern education, and railway system, and many other political, economic, and technological improvements to Ethiopia for the first time during his years at the helm.

He is today remembered as the father of modern Ethiopia.

Menelik II The son of King Haile Melekot of Shoa (1847 - 1855), was born in 1844 in Ankober, Shoa and heir to the Shewan branch of the Solomonic Dynasty which claimed descent from King Solomon of ancient Israel, and the Queen of Sheba.

On the death of his father in 1855 he was taken prisoner by Emperor Tewodros II (Theodore II), a former minor noble originally named Kassa of Kwara, who had usurped the Imperial throne from the last Emperor of the elder Gondar branch of the Solomonic dynasty, Emperor Johannis III (John III).

Menelik was imprisoned on Tewodros' mountain stronghold of Magdala, but was treated well by the Emperor, even marrying Tewodros's daughter Alitash.

However, he would eventually succeed at escaping from Magdala and abandoned his wife, returning to Shoa to reclaim his ancestral crown and at once attacked the usurper claiming the Imperial throne for himself as well.

These campaigns were unsuccessful, and he turned his arms to the west, east and south, and annexed much territory to his kingdom, still, however, maintaining his claims of divine right to the Imperial Crown of Ethiopia in addition to the royal one of Shoa.

In 1883, King Menelik married Taytu Betul, a noblewoman of Imperial blood, and a member of the leading families of the regions of Simien, Gojjam and Begemder.

Her uncle Dejazmatch Wube had been the ruler of Tigre and much of northern Ethiopia. She had been married four times previously and exercised considerable influence. Menelik and Taytu would have no children.

Menelik had previous to this marriage, sired not only Zauditu ( eventually Empress of Ethiopia), but also another daughter, Shoaregga (who married Ras Mikael of Wollo), and a son Prince Wossen Seged who died in childhood.

Menelek's clemency to Ras Mangasha, whom he compelled to submit and then made hereditary Prince of his native Tigre, was ill repaid by a long series of revolts by that prince.

After the suicide of Tewodros II in 1868 following his defeat at the hands of the British at Magdalla, Menelik continued to struggle against the various other claimants to the Imperial throne.

The eventual successor, the Emperor Yohannes IV (better known to Europeans as King John of Abyssinia) was however able to better exert his claims due to the large number of weapons left to him by the British whom he had aided against Tewodros.

Being again unsuccessful, Menelik resolved to await a more propitious occasion; so, acknowledging the supremacy of Yohannes.

In 1886 Menelik of Shoa married his daughter Zauditu to the Emperor's son, the Ras Araya Selassie. Ras Araya Selassie died in May 1888 without any issue by Zauditu of Shoa, and the Emperor Yohannes IV was killed in a war against the dervishes at the battle of Gallabat (Matemma) on May 10, 1889.

The succession now lay between the late emperor's natural son, the Ras Mangasha, and Menelek of Shoa, but the latter was able to obtain the aliegance of a large majority of the nobility on November 4, and consecrated and Crowned as Emperor Menelik II shortly afterwards.

In 1880, at the time when he was claiming the throne against Mangasha, Menelek signed at Wuchale in Wollo province (Uccialli in the Italian version), a treaty with Italy acknowledging the establishment of the new Italian Colony of Eritrea with its seat at Asmara.

This colony had previously been part of the northern Tigrean territories from which Ras Mangasha had generated support, and the establishment of the Italian colony weakend the Ras.

However, it was soon found that the Italian version of one of the articles of the treaty placed the Ethiopian Empire under Italian domination, while the Amharic version did not.

Menelik denounced it, and after negotiations failed, abrogated it, leading Italy to declare war and invade from Eritrea. After defeating the Italians at Amba-Alagi and Mekele, he inflicted an even greater defeat on them, in the battle of Adowa on March 1, 1896, forcing them to capitulate. A treaty was signed recognizing the absolute independence of Ethiopia.

Menelik II's French sympathies were shown in a reported official offer of treasure towards payment of the indemnity at the close of the Franco-Prussian War, and in February 1897 he concluded a commercial treaty with France on very favorable terms.

He also gave assistance to French officers who sought to reach the upper Nile from Ethiopia, there to join forces with the Marchand Mission; and Ethiopian armies were sent towards the Nile, but withdrew when the Fashoda Crisis between France and the United Kingdom cooled off.

A British mission under Sir Rennell Rodd in May 1897, however, was cordially received, and Menelik agreed to a settlement of the Somali boundaries, to keep open to British commerce the caravan route between Zaila and Harrar, and to prevent the transit of munitions of war to the Mahdists, whom he proclaimed enemies of Ethiopia.

In the following year the Sudan was reconquered by an Anglo-Egyptian army and thereafter cordial relations between Menelek and the British authorities were established.

In 1889 and subsequent years, Menelik sent forces to co-operate with the British troops engaged against the Somali mullah, Mahommed Abdullah.

Menelik had in 1898 crushed a rebellion by Ras Mangasha (who died in 1906) and he directed his efforts henceforth to the consolidation of his authority, and in a certain degree, to the opening up of his country to western civilization.

He had granted in 1894 a concession for the building of a railway to his capital from the French port of Jibuti, but, alarmed by a claim made by France in 1902 to the control of the line in Ethiopian territory, he stopped for four years the extension of the railway beyond Dire Dawa. 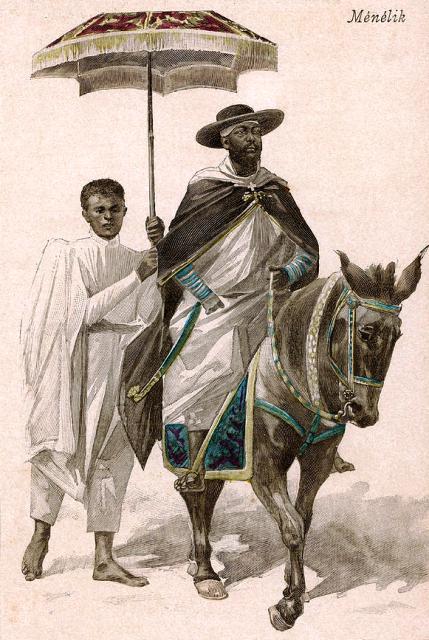 When in 1906 France, the United Kingdom and Italy came to an agreement on the subject, granting control to a joint venture corporation, Menelek officially reiterated his full sovereign rights over the whole of his empire.

In May 1909 the emperor's grandson Lij Iyasu (or Lij Yasu) by his late daughter Shoaregga, then a lad of thirteen, was married to Romanework Mangasha (b. 1902), granddaughter of the Emperor Johannes IV by his natural son Ras Mangasha, and was also the niece of Empress Taytu.

At that time the emperor was seriously ill and as his ill-health continued, a council of regency, from which the empress was excluded, was formed in March 1910.

Lij Iyasu's marriage to Romanework Mangasha was dissolved, and he married Seble Wongel Hailu, daughter of Ras Hailu, and granddaughter of King Tekle Haimanot of Gojjam. Emperor Menelik II died on December 12th, 1913, and is buried at the Baeta Le Mariam Monastery Church of Addis Ababa.