2020 Holidays, Festivals and Rituals in Ethiopia 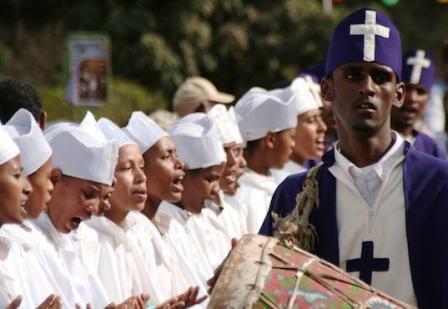 Everything You Need to Know About Ethiopian Holidays

Muslim festivals are timed according to local sightings of various phases of the moon and the dates given are approximations.

During the lunar month of Ramadan that precedes Eid al-Fitr, Muslims fast during the day and feast at night and normal business patterns may be interrupted.

Some disruption may continue into Eid al-Fitr itself.

Eid al-Fitr and Eid al-Adha may last up to several days, depending on the region.

All There is to Know About Ethiopian Festivals

Genna is the Ethiopian Christmas and it relates to other Orthodox Christmas celebrations around the world.

The feast marks the end of the 40 day fasting period of Advent.

On Christmas Eve, the faithful participate in church services through the night before celebrating with family and friends on Christmas day.

Lalibela is the most popular place to celebrate Genna, as thousands of pilgrims flock to this holy city for the celebration.

Fasika is Ethiopian Easter and is celebrated in union with Orthodox Easter celebrations around the world.

Fasika is the most important holiday in the Ethiopian Orthodox calendar and follows a long 55-day fast, where no meat or dairy products are consumed.

Strict followers generally consume one meal of vegetables and lentils during this time.

Church services are attended on the eve before the holiday, where revelers participate in a colorful service lit with candles.

The following day, families and friends celebrate Fasika with special feasts that mark the end of the long fast.

Doro wot, a spicy chicken stew, is the most traditional food served in all households.

Axum has a colorful procession for Palm Sunday (known as Hosanna), the week before Fasika which is well worth a visit.

Like most holidays, the celebration takes place the night before the actually holiday (Saturday night).

Enkutatash, which means Gift of Jewels, is the celebration of the Ethiopian New Year.

Ethiopia follows the Julian calendar, which consists of 13 months - 12 months each with 30 days and a final month with 5 days (6 days in leap year).

The Julian calendar is 7 years and 8 months behind the Gregorian calendar, which is used throughout most of the Western world.

In 2007 (Gregorian calendar), Ethiopia rang in the year 2000 and the new Ethiopian Millennium with colorful celebrations throughout the country.

Enkutatash happens to come near the end of a long rainy season, coloring the green landscapes with bright yellow flowers (called the Meskel Flower, or adei abeba in Amharic) and giving great reason to celebrate the new harvest.

Torches of dry wood are burned in front of houses on New Years Eve.

Families and friends celebrate together with large feasts.

This day also happens to coincide with the saints day of St. John the Baptist.

This religious ceremony can be seen at the Kostete Yohannes church in the village of Gaynt, where celebrations are carried out for three days.

Just outside of Addis Ababa, on the Entoto Mountain, Raguel Church has the largest religious celebration in the country.

Meskel (Finding of the True Cross), is the celebration of the finding of remnants of the actual cross on which Jesus was crucified.

The word "meskel" means "cross" in Amharic. According to Christian tradition, St. Eleni (Empress Helena) discovered the hiding place of three crosses used at the crucifixion of Jesus.

In her dream, Eleni was told she should make a bonfire; the direction of the smoke would tell her the exact location of the True Cross on which Jesus was crucified.

She followed the directions from her dream, and the smoke landed exactly where the cross was buried.

Meskel celebrations begin the night before with large bonfires topped with a cross and decorated with meskel flowers.

The bonfire preparations are blessed and burned while revelers sing and dance around the fire, locally called demera.

It is believed that the direction of the smoke will predict the future for the year to come.

After the demera has burnt out, the faithful mark crosses on their foreheads with the ash.

The biggest Meskel celebration is in Addis Ababa, held in the centrally-located Meskel Square.

Gondar, Axum and Lalibela are also good locations to celebrate this festival.

Probably the most exuberant celebrations take place in the region of the Gurage people, southwest from Addis. 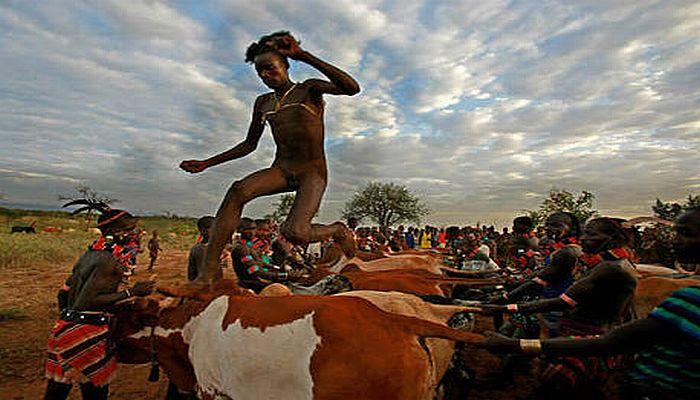 The tribal people known as the Hamer, the Besada, the Benna, and the Tsemay are located in the Southern part of Ethiopia.

They are an isolated people who live very traditional lifestyles that date back ages.

They are pastoralists; therefore their cultures place a great value on cattle.

The population of the Hamer alone is estimated to be in the range of 43, 000.

These four tribes share various traditions and rituals, with the Bull Jumping (Ukuli Bula) ceremony being at the forefront.

This ceremony symbolizes a young mans readiness to make the social jump from an immature member of society into a man responsible enough to be married and raise a family.

For the young man to get married he must jump over about 10 bulls, all of which are standing side by side and chosen by the girls family.

In reality he is really only walking over the backs of the bulls for four times, twice in each direction.

The young man is not permitted to fall and is helped by friends who have successfully accomplished the ritual, they are called Maz.

The Maz help hold the cattle in place. If the young man fails, he will usually blame the wind and will be given a second chance.

In the event he fails again, it is considered as a negative omen and he will have to wait another year.

If the young man gains success then he will marry the girl in exchange for the cattle he will give the girls family.

The two shall share blood and mild for two months; blood from the cows neck and the milk is mixed together and drunk.

The strong and wealthy can marry up to four women.

The Donga is a stick fighting ceremony of the Surma tribe.

The event is comprised of young, unmarried men whose naked bodies are painted with a chalk and water.

The participants are armed with a wooden pole which stands at about six feet long.

The contestants beat each other with the sticks until they are knocked down and eliminated.

The victor is taken away on a platform of poles to a waiting group of girls who decide amongst themselves who will ask for his hand in marriage.

Just being a contestant is considered more important than actually winning.