Zemene Mesafint or the "Age of Princes" (1769- 1855) as it is also called was a time period in Ethiopian history when the country was divided within itself into several areas or regions with no powerful central authority.

It was a time in which the Ethiopian Emperors were viewed only as figureheads who were limited to the capital city of Gondar.

The Zemene Mesafint, which lasted eighty-six years, saw twenty-three emperors occupy the Imperial throne, with most of them being placed on the throne and removed several times.

All this chaos came to an end with the rise of Kassa Hailu or better known by his later prophesied throne name of Tewodros II of Ethiopia.

Modern Ethiopia is believed to have begun with the end of the Zemene Mesafint and the Imperial throne of Ethiopia once again being led by a powerful single authority.

These regional powers constantly waged war against each other for enlargement of their territory and to become the guardians of the Kings of Kings of Gonder, in other words, the ultimate authority in Ethiopia.

The monarchy was respected only in name because of its sacred and religious character.

For this reason alone, the dynasty was able to survive and eventually continue as the central power in Ethiopia.

The Zemene Mesafint period saw numerous regional authorities abuse their power by choosing which among the nobles they saw fit to become Emperor of Ethiopia.

The succession of the Solomonic dynasty was even changed for a brief period, at the time of the death of Emperor Tewoflos, when nobles chose one of their own, Yostos, to become the Negusa Negast or the King of Kings.

They did this out of fear that chaos and strife would persist if the Solomonic dynasty continued in its succession.

The reign of Yostos was very brief and the Imperial throne of Ethiopia returned to the hands of the Solomonic dynasty.

However, the reign of Iyasu II once again brought the country to internal strife, as he was only a child and his mother, Empress Mentewab was the Regent.

Crowning herself as ruler made her the first female in Ethiopian history to rise to power in this fashion. 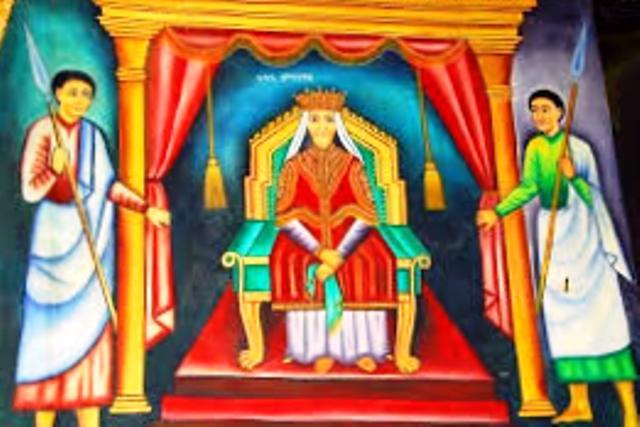 Outside the secluded capital city of Gondar, the Ethiopian empire saw regions and nationalities at war with each other.

The Amharas, the Tigreans, the Agaw, the Showans, and even the relative newcomers the Oromos were all vying for more authority.

The acting regent and power Mentewab would try to build stronger relations with the Oromos by arranging a marriage between her son and an Oromo chief's daughter, but this strategic act would come to haunt her in the long run.

Queen Mentewab's efforts to carry on as regent after the death of her son Iyasu II in 1755 and into the reign of her grandson Iyoas brought her into conflict with Wubit (Welete Bersabe), who was Iyasu II's widow.

Queen Wubit believed that the time of Queen Mentewab's power was over and she should immediately hand over the power to her.

When Iyoas ascended the throne upon his father's sudden death, the nobles of Gondar were shocked to find that he preferred to speak in the Oromo language rather than in Amharic, and favored his mother's Yejju relatives over the Qwarans of his grandmother's family.

Iyoas would continue to increase the favor given to the Oromos, upon entering adulthood.

At the time of the death of the Ras or Prince of Amhara, Iyoas would promote his Oromo uncle Lubo as governor of the province.

The public outcry would force his lead advisor Wolde Leul to finally convince him to change his mind.

The clash between Queen Mentewab and Queen Wubit would see each of them summon their armed relatives and supporters.

The aristocrats in Gondar seeing the conflict potentially erupting and causing irreversible damage to the city and throne would call the powerful Ras Mikael Sehul to act as mediator between the two parties.

Known as a shrewd tactician, Ras Mikael would eventually sideline the two Queens and their supporters, and place himself firmly as the ruler of the Amharic-Tigrean (Christian) camps.

In time, Kassa Hailu would ascend the Imperial throne of Ethiopia through a series of battles he would win.

Kassa would first occupy Dembiya, then after a succession of battles beginning with Gur Amba in 1852 and ending with the Battle of Derasge in 1855.

With this victory he would become the sole power in the country putting an end to the Wara Seh Dynasty and Ras Ali II at the Battle of Aysal and leading a new transition within Ethiopia.