The Italians (after their unification in 1861) wanted to create their own colonies in Africa and started to occupy coastal Eritrea.

Soon they were at war with the Ethiopians in 1885.

On 26 January 1887 a column of five hundred Italian soldiers were cut to pieces on the hill of Dogali near Massawa in Eritrea. The news caused a tremendous stir in Italy.

The battle had been started in the ambiguous uncertainty of the government's instruction by the occupation of Saati and Ua-a` in order to consolidate the Italian position at Massaua, where the Italians, in response to a British request had replaced the Egyptians in the control of the port.

The action in itself was a betrayal to the peaceful declaration of intents which accompanied the Italian landing in Massaua.

Angered, and on his own initiative, the Ethiopian governor of the district under Emperor Yohannes IV, Ras Alula Engida, after requesting the Italian to withdraw from Saati, attacked the fort with a large force.

Hundreds of his men were killed by rifle, as well as, cannon fire, while the Italians only sustained four injured soldiers. This slaughter would convince Ras Alula to retreat his men from the attack.

The commander of the garrison, besieged, short of supplies and ammunition, requested help from Massawa on Januay 26.

The governor General Gene ordered Colonel De Cristoforis, who commanded the force, to march at once to the relief of Saati with 540 men (mostly Italians and a few Eritrean Askari).

This order showed that Gene was quite unaware of tactical skill of Abyssinians and also seriously underrated Satti's information about the largest enemy force in the area; he may even have believe that a detachment of trained European troops was more than a match for a horde of Africans.

De Cristoforis set out after unjustifiable delay the following day, though scouts brought repeated warnings of large concentrations of Ethiopian troops, he continued to advance till he found himself four hours later in the depression of Dogali, where he was attacked by five or six thousand of Ras Alula's soldiers.

Instead of retreating the Italian commander fell back on a low hill and sent a message for reinforcements. A second message was sent an hour later when the Abyssinians had encircled the three Italian companies.

When the final assault came, to the roll of drums the Italian column, surrounded on all sides, had no chance of escape.

A column of reinforcements, terrified by continual alarms came when the battle was over, watched from the hillside and withdrew before night fall without even carrying the away wounded.

Nearly 200 of the 430 victims died because of the failure of the rescue, while 91 soldiers most of them wounded, straggled back to the Italian outpost in the following days.

This victory for the Ethiopians only encouraged the Italians to intrigue with Yohannes' rival, Menelik II, then ruler only of Shewa, and encourage his insubordination towards his Emperor.

Italians felt that the battle of Dogali was an insult to be avenged, and proceeded to attack Ethiopia in the following years.

An Italian perspective on the "Battle of Dogali", Michele Commaramo, traveled to Ethiopia in 1888 to gather materials for his painting, and returned to Italy with and an inspired reversal of the facts.

To the Italians surprise he showed the defenders or the Abyssians making a spirited counterattack.

The Italian government's skillful propaganda soon persuaded the majority to support the plan to send future troops to Massawa to avenge the nation honour: in effect a decision to embark on a full scale colonial war was leading, with illusion and hopes not entirely concealed, to the creation of an empire in Ethiopia.

This was the position of the Depretis government which, despite the opposition and hesitation of the premier himself, had embarked on a timid colonial policy. 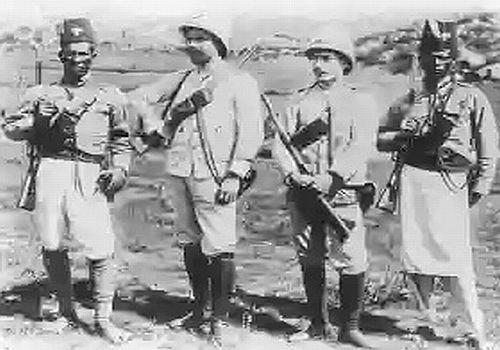 The painting executed in Italy and Abyssinia displays particular concern with the Abyssinians' physical features and costumes. With a taste that wavers between exoticism an ethnological documentation.

This military involvement was to prove even more useful to justify the increasingly repressive and anti social policy of the Crispi government which replaced Depretis in July 1887. The result was another tragic disaster at Adwa in 1896.

So sprang up the legend of the "vile ambush" in the "gorge of Dogali", and the return of the wounded was celebrated at Naples as a sad and silent triumph.

They were born twelve wagons through an immense crowd, rose and camellia petals where showered on them from the balconies, in absolute silence as requested by the organizing committee.

The orators turned the defeat into a limpid testimony to Italian valor and the baseness of Ras Alula and his people. In this atmosphere of dismay, pride and patriotic exultation, whipped up and orchestrated by the government.

In 1888 the Education Ministry Boselli commissioned Michele Cammarano to produce a large painting of the battle of Dogali. Michele Cammarano (Naples, 1835- 1920) was not however, an official celebratory painter, through he had already represented some important episode of the Risorgimento.

Cammarano did not regard the commission as a form of recognition or accept the fanciful accounts of the battle then circulation.

His conviction as a naturalistic painter impelled him to set out immediately for Abyssinia to study the local terrain, light, colours and costumes.

After two years work on the large canvas- he wrote in a letter to his daughter in 1891- he realized the result was unconvincing and returned to the hill of Dogali, to produce a large sketch and brought it back to Italy.

Then after reflecting on the new sketch and showing it to a number of trusted friends, he returned to Massaua and felt compelled to repaint the picture.

"Fifteen month's work and two hundred or so figures carefully drawn...I returned to Dogali, recalled the Abyssinians, recalled the soldiers, more drawing, more studies, a new cartoon!...the first day I painted out a large area of canvas with white lead I felt as if a razor was cutting into my flesh."

After five years of study he took the painting back to Rome and finished it only in 1896, at the same time producing other painting to earn a living. In letters to his daughter, fully cited in the only monograph devoted to Commorano, the painter describes the significance of the scene: "it is the last phase of the sad drama with the 500 overwhelmed by that wave of Abyssinians."

"I had to study the way they fought, handled their weapons, their proud features. The Italians are making their last desperate resistance, the ground is une couche de morts, the setting is faithfully represented. That's what's in the painting."

The impressive composition is, in fact, surprisingly coherent and co-coordinated. The hill of Dogali not the narrow gorge of legendary ambush stretches to the right, with the Italian soldiers forming a square white with their uniforms, drawn up in files and receding in perspective.

At the top, sheltered from the fore of the attack, are the park animals with munitions and supplies for the fort at Saati.

The low point of view enables the artiste to accentuate the slight slope of hillside and also coincides with the scenes dramatic centre: it is set at the foot of Colonel De Cristoforis, who is grasping a spiral with one hand and striking at an Abyssinian warrior in an attempt to cut his way through to the enemy leader, distinguished by his rich garments and precious fabric, here shown trying to retreat protected by four warriors.

The Battle of Dogali would later lead to the First Italo-Ethiopian War which ended in the Italians defeat at Adwa.

In 1936, they finally obtained their revenge with the Second Italo-Ethiopian War with a brief occupation only to be defeated by a joint British and Ethiopian liberation force.