Ethiopia in the Congo Crisis 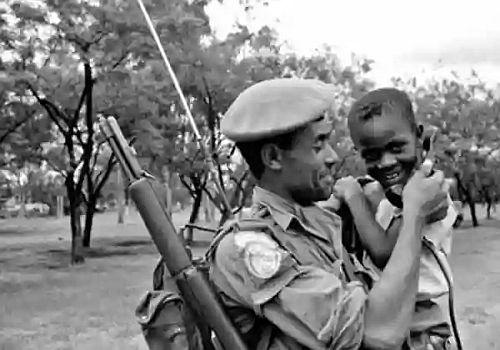 Ethiopians in the Congo Crisis

The day that the First Republic of the Congo became an independent state was the beginning of one of its saddest times in the country's history.

Dubbed the 'Congo Crisis', this turmoil lasted from Independence Day in 1960 until Joseph Mobutu (Mobutu Sese Seko) became the president of the country in 1966.

An army mutiny against its almost entirely Belgian officers was the igniting spark.

This led to the military intervention of Belgian forces that went in to extract its citizens in the country.

While there was a threat to the citizens it was still deemed to be an illegal act - a violation of the national sovereignty of the Congo.

The Belgian troops and civilians declared an independent state, the State of Katanga, and seceded from the Congo.

A close Belgian ally, Moise Tshombe, was made the leader. But before the mineral rich state could even stand on its own two legs, there was another rebellion in the north by the Luba people.

This resolution stated that Belgium should remove its troops and that the UN would provide military assistance to the Congolese forces.

Ethiopia was among the countries that contributed to the UN troops that were sent to the Congo.

The troops came from the 'Tekil Brigade'. The first brigade to come under that name was the pioneer Ethiopian force sent to make arrangements for the main force that would come under the same name.

The second Tekil Brigade was commanded by Colonel Teshome Irgetu and went into the Congo on June 14th, 1961 to replace the previous expeditionary force.

The constitution of the battalion was actually 4 different infantry divisions that came one after the other from different parts of the country:

Upon its arrival the brigade was quartered at Stanleyville. Its first job of the day was to establish order, security and confidence amongst the people of the Orientale Province - which it accomplished in a relatively short time.

Even when violence broke out, in and around the city on Januray 13th, 1961, the brigade managed to control and calm things down.

The achievements of the Ethiopian troops in the most chaotic of times have been written on the annals of posterity. But to mention a few of their many heroic achievements:

On that very day the battalion was ordered to launch an attack on the enemy. Excerpts from army historians have written:

" (vi) Immediately upon arrival in Elisabethville the Bn was ordered to launch an attack on the enemy. In spite of the hasty order and lack of sufficient time to carry out a recce of any sort, the Bn moved from the airport towards the town in tactical battle order returning automatic fire delivered from tree tops, bunkers and civilian residences. Besides the task of clearing various enemy-held localities along the main road from the airport to the town, the Bn was given the major mission of attacking and capturing the strongly-defended enemy locality of the Lido Hotel. On 15 December 1961 at 0430 hrs (local time) an attack was launched on the Lido by one rifle and one heavy weapons coy of the 8th Bn.2 supported by a few Indian armoured oars. Mission was accomplished by 0600 hrs (local time) and objective was captured. (vii) The 8th Ethiopian Bn lost seven of its men while fighting in the Elisabethville operation and 9 men were wounded. (viii) According to received order, the 8th Bn handed over its areas of responsibility in Elisabethville to the 35th Ethiopian Bn and began its move to its former position in Stanley-tills on 20 Jan 61. When the Bn was fully concentrated in Stanleyville, it resumed its previous duties and took over its previous areas of responsibility."

- Of the 25th Ethiopian Battalion it was written:

"(i) On replacing the 1st Ethiopian Bn of the 1st Tekil Bde, the 25th Tekil Bn established its HQ at Kabalo. In spite of the confused and all time unsteady aspect of the situation, the 25th Bn carried out its tasks so well that firm co-operation and good understanding between the force and the native Balubas was created. As a result the Balubas never liked the idea of this Bn being transferred to another place in the Congo. (ii) On 9 December 61, the 25th Bn sent one of its coys to Manono to strengthen the coy from the Indian Independent Me, already there. The situation at Manono gradually grew worse and finally the force of one bn of Tshombe's Gendarmerie (which had strengthened its position in the town of Manono and around all the key points) launched an attack on the two coys, which only had four armoured cars for a fire support. The fighting carried on continuously for three days, from 6 to 9 Dec, and the 25th Bn lost one man and three were wounded. Outnumbered by the enemy and after three days of hard fighting, the two coys managed to drive back the enemy from their well-defended areas in Manono to Mitwaba and other nearby areas. (iii) Due to the uncertainty of the situation at Manono the rest of the 25th Ethiopian Bn was ordered to move to Manono. After handing over the protection of Kabala to the local ANC force, the whole Bn concentrated at Manono on 10 December 61. This Bn is still at Manono making all efforts to establish the peace and order previously achieved in the neighbouring area of Kabalo."

- Of the 35th Ethiopian Battalion it was said:

"(vii) Acting on an urgent order from HQ ONUC, the 35th Tekil Bn again moved to Elisabethville where fighting had broken out between the UN and Tshombe's force. On arrival in Elisabethville of only half its force (the rest being airlifted a week later) on 7 Nov. 61, the Bn succeeded in clearing bunker after bunker, which the enemy had taken so much effort to prepare. The old airfied, the police station, Sabena Guest House and the White's Building, were all objectives which the Bn captured. The final objective captured by the En was the Union Miniere - the well-known Katanga mine centre prized by the enemy more than any other place in Elisabethville. During the Elisabethville operation, the 35th Tekil Bn lost one soldier and two were wounded. The Bn is still in Elisabethville on the active task of ensuring safety of individuals and security in the confusion-struck capital of Katanga."