The Abyssinia-British War, also known as the Abyssinia Expedition, was not a war for expansion but rather a rescue mission.

In 1862, he had made a formal request to the British government for weapons and military experts.

As a Christian nation often engaged in warfare with Muslim neighbors, the Emperor wanted British support and expertise both to help him control his own kingdom and to block the spread of Islam in his region.

He composed a letter to Queen Victoria asking for help, but, for reasons unknown to this day, the plea remained unanswered.

Enraged and feeling disrespected by the lack of response, Emperor Tewodros was further infuriated when he found out that the British Consul, Captain Charles Cameron, had just returned back to Abyssinia after a visit to neighboring Egypt, one of Abyssinia's enemies.

In response, Emperor Tewodros would go on to hold Captain Cameron and others hostage until he received a response to his letter to Queen Victoria.

The government in Britain at the time was reluctant to get involved, but letters sent from Captain Cameron to the British media, and the fact that British women and children were among the hostages, gave the matter immediate attention.

The Ethiopian dispute became a contentious issue in the ensuing British general elections, with the Tory Party under Lord Derby and Benjamin Disraeli committing itself to a rescue expedition should they be victorious in the elections.

With their victory, Sir Robert Napier, Commander-in-Chief of the Bombay Army was chosen to lead the Abyssinian expedition.

Sir Robert would immediately begin to organize a force that would land into Abyssinia, enter the interior, keep supply lines functional, and wage a war against the forces protecting the Emperor at his mountain fortress of Magdala.

To this effect, thirteen thousand soldiers, eight thousand workers, thousands of mules, hundreds of camels, and forty-four elephants would be deployed from Bombay, India in 1867.

After a short two week journey to the east coast of Africa, they built their main base in Annesley Bay.

There was tremendous pressure upon Sir Napier to complete the expedition by June, before the onset of the heavy summer rains that would be a logistical nightmare, therefore putting a pause on the mission.

Emperor Tewodros was also using the time to gather his military forces at his mountain fortress of Magdala, and with heavy artillery, he was a force to be reckoned with.

By January, Sir Napier's forces which included Indian regiments began their march to the interior of the Abyssinian Highlands.

Along the way, Sir Napier would hold meetings and create treaties with various local authorities in order to protect his supply and communication lines.

The march to Magdala took almost three months over terrain that was difficult to navigate.

Upon reaching Dildi, the British could now lay their eyes on the fortress of Magdala.

Ravines were deep and precipices along the way made sure that the British force moved at a snail's pace.

While slowly advancing upon Magdala, Emperor Tewodros would take the daring initiative to launch a raid against his approaching enemies.

Thousands of Abyssinian troops charged down the mountain with muskets and spears, but the British with their new breech-loading Snider rifles laid waste to the Abyssinians.

Over five hundred Abyssinians were killed from the onset of the battle, with many more being wounded in the attack that lasted about an hour and a half.

The British and Indian forces barely lost a soldier. 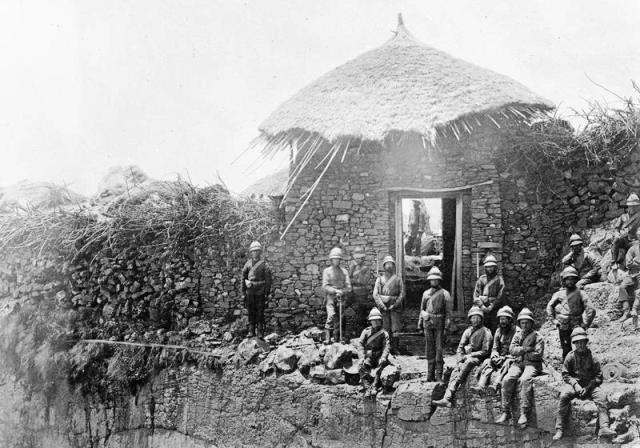 This engagement would for the Emperor to retreat further into his mountain fortress to await their arrival and assault.

Empero Tewodros who was already under great pressure from local politics and acting increasingly erratic, would kill and mutilate a number of people, leaving them in a mound at the base surrounding the fort.

This would cause Sir Napier to dismiss the Emperor's attempt at negotiating for peace, in which he releases the hostages.

The battle began by using mountain guns to bomb Magdala, and then the infantry commenced to provide cover fire, while military engineers approached the entrance to the gates.

Rather foolishly, the engineers would arrive at the gates under heavy fire only to realize they had indeed forgotten their explosives.

This folly was offset by the ingenuity of a soldier who found another entrance, enabling enough soldiers to climb over the wall and open the gates for the main attack force.

Emperor Tewodros would be found dead not far from the entrance. He would use a pistol to shoot himself instead of surrender to the attacking forces.

Aside from looting the treasures in fortress, the British would also capture the Empress and Tewodros's son Alemayehu for transport to England.

Along the way, unfortunately, the Empress would die and Prince Alemayehu would also die young in England, some say from loneliness and a broken heart.