Taitu Betul was Empress of Ethiopia from 1889 to1913. The third of four children in an aristocratic Ethiopian family that descended from the Solomonic dynasty, Taitu was born in 1851.

She is known to have wielded considerable political power as the wife of Menelik, both before and after they were crowned Emperor and Empress in 1889.

Deeply suspicious of European intentions towards Ethiopia, she was a key player in the dispute over the Treaty of Wechale with Italy in which the Italian version made Ethiopia an Italian protectorate.

The Empress held a hard line against the Italians and when talks eventually broke down resulting in an invasion, Taitu marched north with the Emperor and the Imperial Army at the historic Battle of Adwa which resulted in the humiliating defeat of Italy in March 1894.

Not only was she the first lady of Ethiopia behind the mighty Emperor as a proud African history was made at Adwa, she was also alongside the Ethiopian army at the frontier of the battlefield serving her country. 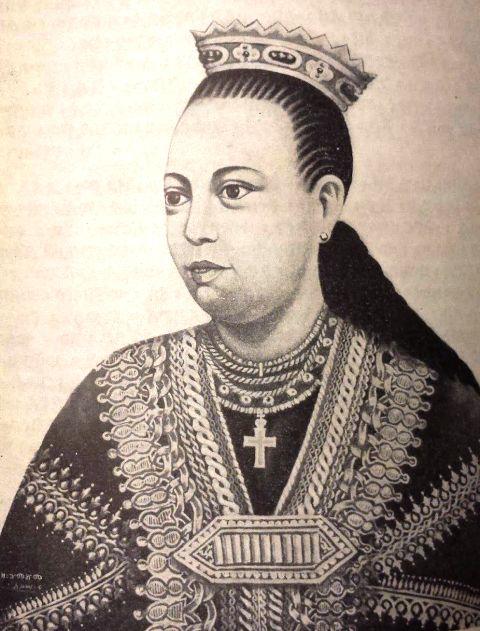 In 1889, she collaborated with Emperor Minilik to establish Addis Ababa as the nation's capital. And it was Taitu who gave Addis Ababa its name.

When Minilik's health began to decline around 1906, Taitu started making decisions on his behalf.

Minilik died in 1913 and was succeeded by Lij Iyasu. Taitu lived the rest of her life at Entoto Maryam Church near Addis Ababa where she died on 11 February 1918. Taitu and Menelik did not have any children.

During this special time of the celebration of the Adwa, I would like to present to you an article about the life of Etege Taitu Betul and her undeniable contributions for the victory of the Adwa battle.

This is dedicated to all women who contributed and are contributing towards our society and their beloved country.

Empress Taytu Betul was born in in 1851, in Wollo from a Christian and Muslim family. She had a comprehensive education and was fluent in Ge’ez, the classical Ethiopian language; which was a rare achievement for a woman at the time, as education was mostly reserved for boys. Taytu was the third of four children in an aristocratic family related to the Solomonic dynasty of Ethiopia.

Taitu is known to have exercised political power as the wife of Menelik, both before and after he was crowned Emperor in 1889.

She founded Addis Ababa, which remains Ethiopia’s capital city today, and the final decades of her reign witnessed a period of modernization, which gradually opened Ethiopia up to trade and greater technical expertise.

Empress Taytu was a loyal and respectful wife to her husband Emperor Menelik II. According to royal historians, their marriage was that of equals characterized by trust, respect, and mutuality.

She was co-equal with Menelik, who always consulted her before making important decisions.

Determined to resist imperialist designs on her country, she increasingly opposed any negotiations that would result in the loss of Ethiopian territory.

When diplomacy gave way to war, she rode out at the head of her army, at her husband’s side.

She was the one who pushed the emperor to declare war against Italy at the Battle of Adwa—tearing up the 1889 Treaty of Wuchale between the Ethiopian Empire and Italy, a treaty whose article 17 had two different meanings in Amharic and Italian versions: The Amharic version recognized the sovereignty of Ethiopia and its relationship with Italy as just a diplomatic partnership, while the Italian version made Ethiopia Italy’s protectorate.

The moment that discrepancy was uncovered, Empress Taytu was the first to push the hesitant Emperor and other men to stand up for liberty, dignity and against Italian aggression.

When Count Antonelli (Italian envoy at the time) proposed that the treaty be revoked on condition that Menelik was not to seek the protection of any other European power because that would be a slight to Italian honor her immediate rejoinder was:

In effect making war inevitable and leading eventually to the standoff between the two armies in Tigray at the end of 1895.

Her deeds at a critical moment in Ethiopian history not only saved Ethiopia from European colonization, but it also paved the way for the decolonization of Africa.

Her advice and action resulted in the defeat of the Italian army at the 1896 Battle of Adwa, a mighty European army defeat at the hands of Africans.

She was the savior of her nation when it was about to fall into the hands of the Italian colonizer. Perhaps, there would not have been the famous Battle of Adwa on March 1, 1896, which marked the Ethiopian victory against colonialism, without Empress Taytu, for she inspired it. Empress Taytu had her own battalion at war, which she bravely commanded in the battlefield, fighting on the frontline and motivating men against retreat.

She also mobilized women, both as fighters and nurses of wounded soldiers. Five hundred soldiers guarded the empress, and her entourage of about one hundred women took care of preparing the food for the soldiers.

Taytu was also the receiver and analyzer of intelligence information collected by spies, which historians have characterized as of crucial importance to the Ethiopian victory at the battle.

Far from simply arranging for the support of Menelik’s armies, Taitu led her own group comprised of at least 5000-foot soldiers and 600 on horseback.

She was responsible for a number of both tactical and strategic level decisions in addition to actually leading her army into battle on at least one occasion.

Furthermore, at the main battle of Adwa, she maintained tactical command of her own army (though held mostly in reserve) in addition to providing logistical support to others through the use of her group of thousands of strong women in the camp.

The Italian army had occupied Mekele before the Emperor reached there. The leftover Italian soldiers fled to Mekele to their superiors and fellow soldiers with info about Ambalage.

As a result, they were instructed to build sophisticated bunkers even in today’s standards. The sharp-edged piece of wood stuck in the ground together with broken bottle pieces as well as the barbed wire made it very difficult for the Ethiopian army to get even near the bunkers.

The few Ethiopian soldiers that were able to pass the three line of defense faced the brutal machine guns.

So many soldiers have died that the situation at one point made Emperor Menelik and his army leaders wearisome. It is at this time that Empress Taitu stepped in to devise a plan.

She said to Azaj Ze Ammanuel,” go and look if it is possible to surround the drinking water supply of the Italian army; make sure you consult with Lique Mequas Abate.

Lique Mequas Abate replied that the water is in the valley; it is about 300 feet from the nearest Italian bunker. He also added that he would watch the bunkers door and use his canon if he needs to support Taitu’s personal army in their effort to protect the supply.

He also stated that the Italian guard who is supposed to watch the enemy at the location goes to back to his bunker when it gets dark.” At this time, Etege Taitu ordered her soldiers after getting permission from Menelik to capture the water supply.

She called her army officials and said, “you were anxious to get involved in this war. As you know, there is not enough space for all of the army; I do not want to lose any of you over the friendly fire. Be on guard in the water supply down in the valley. I hope you are not afraid to die for your country and honor. I will give gifts for those who will come back alive. I will take care of the families of those who die; Let God be with you!!!”

As planned, Taitu’s army occupied the water. Once the Italians figured out that their supply is taken, they have attempted several times to win it back. Because of the unparalleled sacrifice of Taitu’s army and her support, the water supply remained under the control of Ethiopians.

“Empress Taitu used to send Tej(honey wine), well-prepared fitfit(injera with sauce), raw meat around 4:00am in the morning. She took care of them in such a nice way that their morale was high and they are ready to die for her, their country and their honor.”

They defended the water well for 15 days from the attack of the Italians.

As Moltedo tried to put the scenario among the Italians, “we, the officers were able to wash our faces from the morning dew using our towels for seven days. Our names will be called to take ration for water. This was done to make sure that no one will come back for the second round. As for the black soldiers who fought with the Italians, their ration was a quarter of a glass of wine with a half glass of water for the Christians and a glass of water for the Muslims. Our horses, mules and cattle started dying of thirst.”

Only this time that the Italians came forward to renegotiate with Emperor Menelik through Monsieur Filter.

The Italian army was ordered to immediately leave Mekele to the command center in Adigrat. Menelik agreed to it after securing the peaceful takeover of the bunkers that saved so many Italian soldiers.

Taytu strongly defended national interests by overcoming challenges both from within and from without.

Just as there was no Menelik II without Taytu Betul, there would have been no Ethiopia without Taytu’s great strength, courage, devotion, and determination.

Taytu Betul was truly Ethiopia’s sunshine, and should forever be remembered as one of the greatest empresses of Ethiopia and Africa as a whole.

Her contribution to her nation didn’t stop there when Menelik’s health began to decline around 1906, Taitu began to make decisions on his behalf.

Certainly, Taytu controlled the day-to-day operation of her country’s government to a greater extent than royal contemporaries like Queen Victoria.

She was also more cynical than her husband about the foreigners who flocked to Addis Ababa seeking government contracts.

Addressing such business interests, Taytu would pointedly ask, “Where will our poor country find the resources to satisfy the needs you create? Frankly, do you think our people will be happier [with a railroad] than they are now?”

Such hard-headed bargaining benefited the empire and gained the country international respect.

Taitu and Menelik did not have any children, and when he died in 1913, he was succeeded by his grandson from a daughter of a previous marriage, Lij Iyasu.

Taitu is believed to have been somewhat active in the plot that eventually removed Emperor Iyasu V from the throne in 1916, and replaced him with her step-daughter, Empress Zewditu. Zewditu, Menelik II’s daughter by yet another previous marriage, had always been close to Empress Taitu, and was additionally married to Taitu’s nephew, Ras Gugsa Welle.

Following that, Taitu was banished to the old Palace at Entoto, next to the St. Mary’s church she had founded years before, and where her husband had been crowned Emperor.

Taitu lived out the rest of her life at the old palace next to the Entoto Maryam Church overlooking Addis Ababa, where she died on February 11, 1918. She is buried next to her husband at the Taeka Negest Ba’eta Le Mariam Monastery in Addis Ababa.