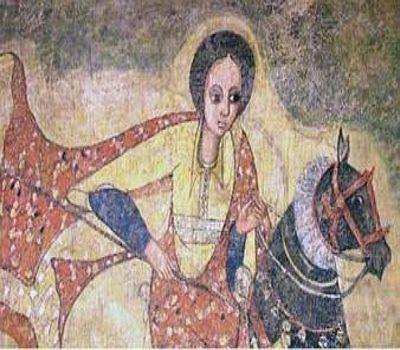 Gudit, Gwedit, Yodit or Judith, Queen (perhaps 10th century A.D.), also known in Amharic as 'Esato and in Teltal as Ga'Ewa, was a rebel leader to whom the downfall of the ancient Aksumite Empire is traditionally ascribed.

In addition to oral tradition there is considerable documentary evidence that c. 970 A.D. the ruling Aksumite dynasty was harassed by a non-Christian queen, who lay waste to the city and countryside, destroyed churches and monuments and sought to exterminate all members of the royal family, the House of David.

Many traditional sources affirm that this queen was of the Jewish faith, or had adopted it from her husband.

This perhaps led some traditional Ethiopian scholars and others such as Bruce to assume that she was a daughter of the Falasha rulers of Semein.

Gudit has also been confused with the Princess Masoba-Warq or Terde'a-Gabaz said to have been instrumental in the transfer of power from the legitimate royal house to the Zagwe, a dynasty of usurpers who seized the throne at some time after the fall of Aksum.

Thus Gudit herself has sometimes been pictured as the founder of the Zagwe dynasty and is said to have reigned for forty years and to have been succeeded by her descendants.

That a rebellious and non-Christian queen harried the Emperor and the Christian populace of northern Ethiopia in mid-tenth century is attested from an independent source, although the problem of identifying the queen remains a complex one, and her identification with the legendary Queen Gudit is by no means secure.

In the History of the Patriarchs of Alexandria, it is recorded that, during the Patriarchate of Philotheos (979-1003 A.D.), George, the King of Nubia, received an appeal for transmission to the Patriarch from an unnamed ruler of Ethiopia seeking the appointment of a new Metropolitan.

The letter described how a woman, apparently queen of the Bani al-Hamuya (the script of the Arabic text lends itself to various interpretations), was laying waste to the country and harrying the Emperor and his followers from place to place in an effort to wipe out Christianity completely.

The Emperor attributed this calamity to divine wrath incurred because in an earlier reign, during the Patriarchate of Cosmas (923-34 A.D.), the Metropolitan, Abuna Petros, had been dispossessed and the imposter Minas installed in his place; since this episode no Metropolitan had been sent to Ethiopia.

In response to this appeal Philotheos appointed Dan'el, a monk from Abbu Maqar as abun. Subsequent to his arrival in Ethiopia, peace seems to have been restored and it is recorded that "God was no longer angry with them and put an end to the activities of the woman who had risen against them."

There has been much discussion among scholars about the correct interpretation of the designation of this queen in the Arabic text. Conti Rossini, reading Bani al-Damuta for al-Hamuya, has suggested that she was a ruler of the once powerful old kingdom of Damot, lying at this date south of the Abbay, and that her rebellion represented an attempt by one of the indigenous Sidama peoples of southern Ethiopia to reassert their independence and resist domination or absorption by the Semiticized and Christian north.

This plausible hypothesis has received widespread support form modern scholars, many of whom envisage the warrior-queen as ruler of a Sidama kingdom, differing only in the possible locations they suggest as the seat of her kingdom. It should not be forgotten, however, that other Arabic scholars have interpreted the phrase differently, although these differences are not necessarily irreconcilable.

For example, Ignazio Guidi read al-Yahoudya (Jews) for al-Hamuya, while Joseph Halevy considered al-Haghouya (Agaw) as a more likely interpretation. In more recent years, Enrico Cerulli has pointed out that queens such as Badit, daughter of Maya (d. 1063 A.D.), were not unknown even among Muslim populations of Ethiopia.

The episode of a warlike queen receives further confirmation, although the geographical location remains vague and specific identification with the queen of the Bani al-Hamuya is not possible, in a note on Ethiopia by the contemporary Arab scholar Ibn Hawqal who wrote:

"As for Abyssinia, it has been ruled by a woman for many years. It is she who killed the Emperor of Abyssinia, known as the hadani and she still holds sway over her own country and the neighbouring regions of the hadani's country in the interior* of Abyssinia".

The basic theme of the legend of a rebel queen as a destructive fury bringing ruin and devastation upon Aksumite civilization is common to Ethiopian tradition, both oral and written, and to the corroborative external sources.

Ethiopian tradition affirms, however, that this queen was of the Jewish faith.

Some manuscripts studied recently at Aksum by the contemporary scholar Sergew Hable-Selassie provide a surprisingly detailed framework to the story.

They indicate a belief that Gudit was related in some way to the royal family - she is, for example, said to have been a grand-daughter in the female line of Emperor Wedem-Asfarei. She is also said to have married a Jewish prince, a certain Zenobis, son of the King of Sam, which is an Arabic form for Syria, but here appears to designate a country on the Red Sea coastal plain, perhaps to the north of Ethiopia.

She set out with her husband at the head of an army he had provided to attack Aksum in vengeance for harsh treatment that she had received in the past, coming across the Samhar plain from the coast, at Arkiko, i.e. a complete change of direction from that usually postulated by modern scholars.

It is of interest to note that the same text gives the name of the queen in its various forms with the addition of the Teltal, Ga'ewa, reminiscent of the Beja queen Ga'ewa who was an ally of Ahmad Gragn.

A detailed description of the destruction of Aksum is also included, first the cathedral and then the ancient stelae, "constucted by Greek artisans, at great cost."

Traditional scholars generally affirm that the invasion of the queen dealt a death blow to the city of Aksum and it is interesting to note, that, in the Gadla 'Iyasus-Mo'a, it is recorded that, in the seventh year of the reign of Del-Na'ad, sometimes said to have been the son or grandson of Degna-Zan , "[the seat of] the kingdom was transferred from Aksum to the country of the east."

It is also suggested that, to plan her campaign, Gudit took advantage of the death of Emperor Degna-Zan, who had perished with an entire Aksumite army in the desert, while on an expedition to the "land of the Arabs," apparently western Ethiopia.

With the evidence available to us we can only hypothesize on the historicity of Queen Gudit. If her existence as an historical personage is accepted, it is still a matter of conjecture whether she should be identified with the queen of the Bani al-Hamuya and represented a resurgence of one of the non-Christian indigenous populations of southern Ethiopia, or whether she had indeed much closer links with the Aksumite dynasty and was perhaps herself an apostate and leader of a Judaized element.

It is possible that the whole cycle of legends of a Jewish queen who brought about the downfall of Aksum evolved from indistinct memories of invasion and persecution by a woman ruler, who in fact killed the reigning Emperor and for many years persecuted Christians and destroyed their churches.