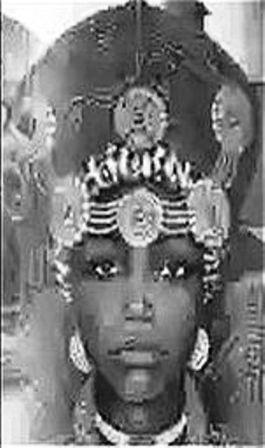 Biblical evidence shows that a powerful Empress named Queen Candace was the ruler of Ethiopia. The Bible mentions her in the Bok of Acts 8:26-39. The following is an excerpt of Queen Candace and her eunuch:

Acts 8:26-39 Now an angel of the Lord said to Philip, "Go south to the road - the desert road - that goes down from Jerusalem to Gaza." 27 So he started out, and on his way he met an Ethiopian eunuch, an important official in charge of all the treasury of Candace, queen of the Ethiopians. This man had gone to Jerusalem to worship, 28 and on his way home was sitting in his chariot reading the book of Isaiah the prophet. 29 The Spirit told Philip, "Go to that chariot and stay near it." 30 Then Philip ran up to the chariot and heard the man reading Isaiah the prophet. "Do you understand what you are reading?" Philip asked. 31 "How can I," he said, "unless someone explains it to me?" So he invited Philip to come up and sit with him. 32 The eunuch was reading this passage of Scripture:

"He was led like a sheep to the slaughter, and as a lamb before the shearer is silent, so he did not open his mouth. 33 In his humiliation he was deprived of justice. Who can speak of his descendants? For his life was taken from the earth."

34 The eunuch asked Philip, "Tell me, please, who is the prophet talking about, himself or someone else?" 35 Then Philip began with that very passage of Scripture and told him the good news about Jesus. 36 As they traveled along the road, they came to some water and the eunuch said, "Look, here is water. Why shouldn't I be baptized?" 38 And he gave orders to stop the chariot. Then both Philip and the eunuch went down into the water and Philip baptized him. 39 When they came up out of the water, the Spirit of the Lord suddenly took Philip away, and the eunuch did not see him again, but went on his way rejoicing.

But one of the greatest generals of the ancient world was also the Empress of Ethiopia.

This formidable black Queen Candace, was world famous as a military tactician and field commander.

Legend has it that Alexander the Great could not entertain even the possibilty of having his world fame and unbroken chain of victories marred by risking a defeat, at last, by a woman.

He halted his armies at the borders of Ethiopia and did not invade to meet the waiting black armies with their Queen in personal command.

The Romans met several queens of Meroe whom they thought were named "Kandake" (KAN-DA-key).

They did not realize that "Kandake" was simply the Meroitic title meaning "Queen" or "Mother of the crown prince".

The Kushites gave special honor to their queens because they believed that the kings, who were sons of these women, were also sons of the great god Amun.

In other words, they imagined that these ladies were actually wives of the god and mothers of the living gods (the kings).

If a king died, his wife might rule alone while her son was growing up. The people would worship her like a goddess.