After the Emperor's suicide, the British burned and looted the city of Makdala including its churches.

They took a large number of treasures with them that can still be seen in various museums and libraries in Europe, as well as in private collections.

Emperor Tewodros II's wife, Empress Tiruwork, and his young son and heir, Prince Alemayehu, were captured and order was given to take them to England. 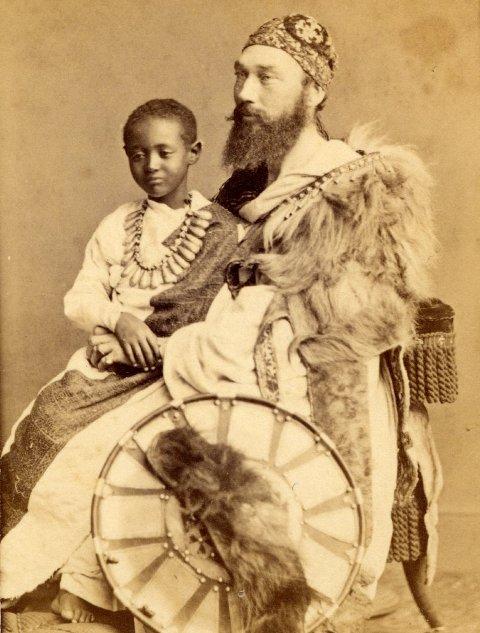 Empress Tiruwork died on the journey to the coast and was buried at Sheleqot Monastery in the Tigrai province of Ethiopia. Prince Alemayehu made the journey alone but grew increasingly lonely in imposed exile in England.

Prince Alemayehu was only 7 years old when his father committed suicide. The Prince was very close to his father who wanted and prepared him to be his successor as the next emperor of Ethiopia one day. When the British army marched into Ethiopian territory, the Emperor was confident that he could defeat them and send them back.

To do that he counted on his own determination and brave nature, he counted on his army of loyal warriors, and he counted on his fellow Ethiopians to rally behind him and defend Ethiopia. Prince Alemayehu witnessed all of the preparation that his father was making to fight the British as they advanced into his fortress.

He also witnessed his father come to grips with the possibility of defeat as the Emperor's Ethiopian opponents started to desert him due to their opposition of the Emperor's attempt to restructure the Ethiopian political system.

History has recorded that when the Emperor took his own life to deprive the British of the prospect of taking a great emperor hostage, he was a man in despair and in disbelief.

Prince Alemayehu was among a very few group of people who would have seen the Emperor driven to despair in his final moments.

When the British army found the Emperor's body, the only chance they had of producing evidence of their triumph over Ethiopia upon their return to England was to take with them Prince Alemayehu and his mother as trophies.

But the young Prince's life took another turn for the worse when his mother died on the journey to England within Ethiopian boundaries.

The grief-stricken Prince witnessed the death of his parents, the defeat of his country, the destruction of his father's compound, the looting of his country's treasures, and at the end of all of these, he found himself under the control of those who literally turned his life upside-down.

Many reports of how Prince Alemayehu was taken from Ethiopia mention a British army soldier by the name of Tristram Speedy.

According to these accounts, Speedy was appointed guardian of Prince Alemayehu and as such, he was in charge of the Prince's life. Tristram Speedy took Prince Alemayehu to India first, where he worked as an army officer, and subsequently to England.

Historical accounts indicate that upon arrival in England, Prince Alemayehu met Queen Victoria at her residence, known as Osborne House on the Isle of Wight.

The Price was sent to Rugby School, which is one of the oldest independent schools in Britain (established in 1567 and still inexistence).

Rugby School is where Prince Alemayehu spent most of his short life in England, learning the language, making friends, contemplating his future, wrestling in thought with his memories of Ethiopia, his parents, his capture by the British and the exhausting journey he had to make to England.

After completing his studies at Rugby School in 1878, the Prince spent a year at the Royal Military Academy Sandhurst, which is the British Army officer initial training centre located about 55 kilometres southwest of London.

Many accounts of the Prince's experience at the officer training centre suggest that he was unhappy to be there, and shortly after his first term as a trainee, Prince Alemayehu died on 14 November 1879 at the age of 18.

What had happened to him since he was 7 was surely more than what any human being can endure, and whatever was troubling him mentally or medically, it was too much for him and he eventually succumbed to it.

Prince Alemayehu, the son of one of Ethiopia's great emperor's and heir to the treasures of one of Africa's richest royal dynasties died in exile without setting foot in Ethiopia ever again.

The Prince is buried in a brick vault outside the chapel of the medieval Windsor Castle in the English county of Berkshire.