Belay Zeleke a true Ethiopian patriot and hero was sometimes also referred to by his horse's name, Abba Koster, as was the tradition at the time.

It is believed that he was born between the years of 1896 through to 1912, with the exact date being contested, largely due to the lack of accurate record keeping from that time.

Belay Zeleke was born to Zeleke Laqaw and Taytu Assane in the city of Borena in Wollo, his mother's native land.

His father on the other hand, was born in Bichena, in Gojjam.

There are two historical accounts as to how Belay Zeleke decided to take to the outskirts of the village and become a brigand and outlaw.

Belay's father, Zeleke Laqaw was the personal bodyguard of Lij Iyasu and upon his overthrow from power, Zeleke moved his two sons, Belay and Ejigu along with his wife to a town called Chaqeta and soon after to Lamchan which is located in Gojjam.

The local government official in charge, upon hearing of his arrival, demanded he turn himself in to the law.

Their home was surrounded by soldiers and when Zeleke along with his relatives refused to give up and surrender, there was an exchange of fire and he was injured.

They subsequently took him to custody and hanged him, all this tragedy took place while young Belay stood by and watched.

Upon coming of age, Belay swore to avenge his father's death and left the city with male members of his family abandoning lawful existence.

He took refuge in the lowlands surrounding the banks of the Abay, and in time, his group grew considerably.

The second account, somewhat less believable, but has basis enough to be mentioned here marks Belay as an avunculicide or uncle killer.

He apparently murdered his fathers' brother for reasons undisclosed and ran off to live as an outlaw.

Belay Zeleke as an Outlaw

There are only scant accounts as to the years Belay spent as an outlaw living in the outskirts of society.

One can assume that as his numbers grew they would have been dependent on robbing from government officials, either by hijacking or raiding.

What is known is that Belay grew to become a formidable leader and a warrior with a knack for militaristic and strategic planning.

In 1935, Benito Mussolini, in charge of the Italian government decided to invade Ethiopia to make up for the humiliating defeat Italy suffered in the Battle of Adwa.

Like many other die hard patriots at the time, love of country and land surpassed any other differences of opinions and/or disagreements with the government or between ethnicities.

Belay Zeleke upon hearing that the Italians had invaded Ethiopia, took up arms against them almost immediately.

His first attack came in the form of an ambush he engineered against a convoy of the Italian army moving from Debre Markos to Bichena.

He and his men made away with all their weapons upon defeating the Italian soldiers guarding the convoy.

With this victory proving their prowess in battle, they proceeded to wage a prolonged battle against anything and everything Italian within the areas of Gojjam, Shewa, and Wollo.

It is well known that he once even captured a general in the Italian army and had him persecuted in a mock criminal tribunal with the resulting guilty verdict being execution by hanging.

Belay's victories began to increase his fame and prestige leading him to be loved and helped by the local populace.

The number of men following Belay also increased considerably and they were a constant threat to the Italians who grew to fear him.

His spirited audacity and daring in battle inspired thousands of Ethiopians to take up arms against the occupying Italians.

With his stature as a formidable military leader growing his men began to address him as Leul Belay or Prince Belay and Atse Begulbetu or Emperor by his own strength.

Belay handed down titles to those of his men he believed were deserving due to their valor and/or tactics in battle.

Titles used by the Imperial throne, such as Keynazmach (right hand), Dejazmach, Fitawrari (first in battle), and Ras.

It is also said that when his brother Dejazmach Ejigu asked him with all the titles given out, what was left for him, Belay replied that the name his mother gave him was enough (Belay means "to be above others").

With all his victories, Belay slowly ousted the Italians from many parts of the region and took control himself to the delight of the people, who respected and admired his heroism.

By 1941, Debre Markos finally fell to the hands of the British forces led by General Wingate and the Italians led by Commander Maraventano being attacked from all sides fled to Shoa.

Debre Markos was consequently taken over by Negus Tekle Haymanot and he summoned Belay to offer him his daughters hand in marriage.

Due to patriots such as Belay Zeleke, and their admirable efforts Ethiopia was once again a nation taking pride in her independence.

Emperor Haile Selassie I taking notice of his efforts appointed him Dejazmach and made him the governor of Bichena, his father's native town.

During the war, Belay led a formidable army and had control of a vast region, and many believed giving him only the small town of Bichena as an affront from the crown.

Yet in still, Belay took to the position but was inevitably not prepared for the intrigues and back stabbing that has long held sway in the governance of the Ethiopian monarchy. 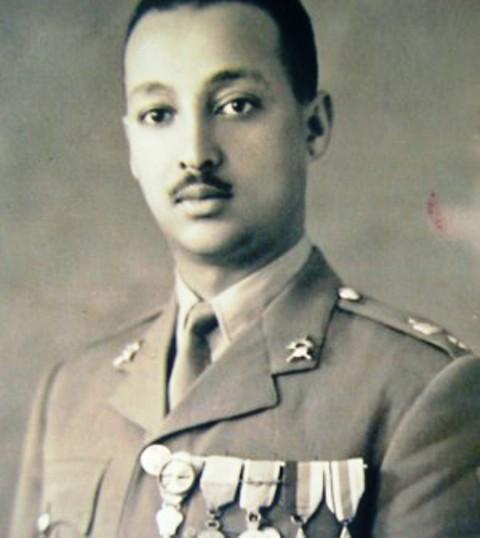 As Belay attempted to appoint officials for his government, by using men he fought with, trusted and believed in, he was betrayed by the nobility in the area.

They reported back to the crown that Belay was planning to take over the government and revolt against the monarchy.

He was summoned to Addis Ababa by Emperor Haile Selassie I, but Belay upon hearing of the intrigue decided it would be wiser to not to leave his stronghold in Somma Terrara or mountain.

The Emperor infuriated by the apparent disrespect subsequently sent soldiers to arrest him but after many attempts and heavy casualties, failed.

Emperor Haile Selassie I known for his brilliance and cunning sent a high ranking party to negotiate his surrender.

The delegation promised to pardon Belay if he bowed down to the crown again, which he did obligingly.

Unfortunately, he was immediately taken to a tribunal and sentenced to death, which was approved by the crown but later reduced to life imprisonment.

Death of Belay the Patriot

As a once exceptional military leader and outlaw who lived free outdoors and moved about a sizable region in full control; prison must have been a hell for him.

After a few years of incarceration, Belay Zeleke, along with his beloved brother Ejigu Zeleke, and several other warriors he fought with attempted a daring prison escape from their jail in the Grand Palace.

Unfortunately, they were re captured not too long after their escape and brought to trial.

This time the death sentence was not to be avoided and a dark chapter in Ethiopian history took place.

On January 12, 1945, the brave, the loved, the admired, the patriot, Belay Zeleke alongside his loyal till the end brother, Ejigu and other of his men were killed by hanging in Teklehaymanot Adebabya in Addis Ababa.