Ethiopian proverbs and wise sayings have been passed down from generation to generation over the centuries.

They give advice about religion, life, business, love and so much more. They are valuable pieces of wisdom.

Most of the Ethiopian proverbs and wise sayings are specific to its culture but in most instances their meaning is universal and useful to anyone, anywhere in the world.

Most Ethiopian proverbs may sound simple and obvious but when contemplated enough they are a very effective means of communicating that add metaphorical expressiveness to anyone attempting to get a thought across.

This has been true since the ancient times, and Ethiopia with its illustrious and long history proves this.

Ethiopian proverbs and wise sayings originated most assuredly from one wise person but eventually made its way to becoming the property of the general population at large.

Today, whether we know it or not, we are all governed in some way by the social and ethical norms expressed in the simple and common sense wisdom of these proverbs and wise sayings.

The following is a list of 155 Ethiopian proverbs and wise sayings in both English and Amharic that we believe shall enrich the lives of the reader.

1. Counsel and advice him, if he refuses to listen, then let adversity teach him.

2. The dog barks after the hyena has left.

3. A rat's witness is another rat.

5. One who plants grapes by the road side, and one who marries a beautiful woman, share the same problem.

6. A woman without a man is like a field without a seed. 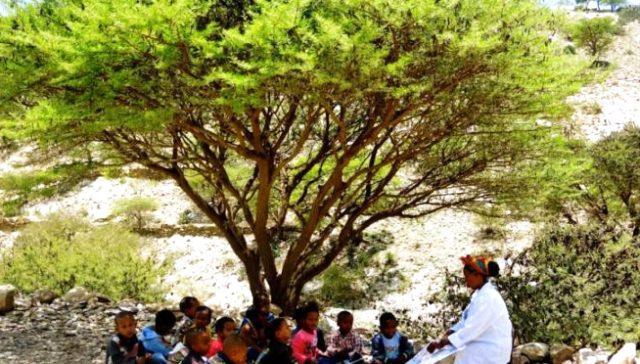 7. The son of the Nile thirsts for water.

9. When one is in love, a mountain top becomes a flat field.

10. The slimming of an elephant and the losses of a wealthy man are not noticeable.

11. When webs of a spider join together, they can trap a lion.

12. A good conversation is always better than a good bed.

13. Slowly by slowly an egg will walk.

15. One who hides thier illness cannot expect to be cured.

16. If one is not in a hurry, even an egg will start walking.

17. It is foolish to start a fire just to see the flames.

18. One who learns, will eventually teach.

19. If you offend, ask for forgiveness; if you are offended, forgive.

23. A foolish daughter teaches her mother how to give birth to children.

24. Do not blame God for creating the tiger, just thank Him for not giving it wings.

27. Ridicule the palm tree only after the date harvest is finished.

28. There are no better witnesses than your own eyes.

29. Restless feet may lead you into a snake pit.

30. One who has not learned to walk cannot climb a ladder.

31. He who recovers from sickness forgets about God.

33. The frog wanting to be as large as the elephant, ended up bursting.

35. That which is over inflated will burst into pieces.

36. When the Nile River knows a secret the desert will soon come to know it too.

37. Whether it rains or not, the lentils have two eyes.

38. Love and a cup of coffee taste best when hot.

39. Do not procrastinate or you will be left in between doing something, having something and being nothing.

41. The person who grew up without guidance will find his mouth slipping instead of his foot.

42. A partner in business will not put an obstacle to it.

43. An eye and a friend are easily hurt.

44. Telling a secret to an unworthy person is like carrying grain in a bag with a hole in it.

47. It is better to be the cub of a living jackal than that of a dead lion.

49. If you are going to a place where corn grows, take a cutting tool with you.

50. What one wishes for is always better than what one has.

51. The best of mankind is a farmer and the best type of food is fruit.

52. The Nile River has no resting place it travels around carrying a log.

53. When the heart is overflowing, it will come out through the mouth.

55. The one who is mistaken is the one who does nothing.

56. The skin reacts according to the country it is in.

57. Where there is no shame, there cannot be any honor.

58. Where man is, disagreement follows.

59. While the heart of a fool is in his mouth, the mouth of a wise man is in his heart.

60. Only he who is not hungry says the coconut has a hard shell.

63. One does not become fat because he chose to break a fast.

64. One is born, one dies, but the land continues to flourish.

65. Saying that it is for her child, she gets herself a loaf of bread.

66. Termites live beneath the ground.

67. A coward will sweat even in water.

68. The mouse is silent while laboring, but when the baby is born, she cries.

69. It is foolish for one to be thirsty while he is in around water.

71. He who chooses to barter usually knows what is best for himself.

72. If they speak, they are wind; if they are silent, they are gourds (water holding instrument).

73. If you see that a town respects a calf, then cut the grass and feed it.

74. Move your neck in accordance to the music.

75. Life has no meaning for one without a home.

76. No one can know what the new day will bring.

77. One shovels with a shovel.

78. One who attempts to hide with a dog, child, goat, or a person with the flu will not stay hidden long.

79. Calves do not fear their mother’s horns.

81. The fool speaks, while the wise man listens.

83. That which has blown away, will not be found again.

84. Repentance and tails are always behind one.

85. If one hides their illness, they can never find the cure.

86. When one walks carefully, thorns prick only lightly.

87. One usually does not take a small piece for oneself.

88. Fooling the chicken landed her in the basket.

89. A home cannot be built for the rainy season that has past.

90. Unless you call out, who will open the door?

91. One thinks of water only when the well is empty.

94. One may have two legs, but that does not mean one can climb two trees at the same time.

95. A fool thinks he is being praised while being insulted.

96. The same water never runs into the same river.

98. The arrogant blind man picks a fight with his guide.

99. One will lose the horse, while looking under the saddle.

100. Hardships do not come to those that are prepared.

101. When there are too many women, the cabbage will be ruined.

102. Those who wish to eat a vulture, will call it a guinea fowl.

103. A fool searches for dung in places where the cow never grazed.

105. Sitting is being crippled.

108. A hyena will enter through open spaces left by a dog.

109. A loose tooth will not rest till it is pulled out.

110. A sad face is noticeable but not a sad heart.

111. A mouse that seeks death will go and sniff a cat's nose.

112. A shameless person has no sense of shame at all.

113. A cactus tastes bitter only to those that taste it.

114. Because he killed his wife he took shelter with his in-laws.

115. A single stick may smoke, but it will not cause a fire.

117. It is better to be an egg this year than to be a chicken the next year.

118. Look forward to the good so that you may enjoy it.

121. Cow dung cannot be collected where no cow has been.

123. Dine with a stranger, but save your love for your family.

124. Do not demand that what you write in the Nile will be read in the desert.

125. Only eat when the food is ready and speak when the time is right.

128. Fifty lemons are a load carried by one person, but for fifty people they are perfume.

129. Even if Jesus Christ's death could have been prevented, Judas would still have been a traitor.

130. Even being offered cold pudding, the coward says: "It will burn my mouth".

132. If relatives help each other, what harm can reach them?

133. If you gladly stoop to the ground do not be surprised if they step on you.

134. It is like using a spoon to get water from the Nile River.

135. Invite him so as to not provoke him, shove him away as to not to let him eat.

136. While men fear danger, women only fear the sight of it.

139. One who runs alone cannot be outrun by another.

140. The cattle is as good as the grazing land in which it grazes.

141. The first camel in the train holds everyone up, but it is the last camel which gets the beating.

142. The small stars always shine while the great sun is often eclipsed.

143. The cow knows the cowherd but not the owner.

146. A fool and water will go the way they are diverted.

147. One who searches too deep for a fish may come out with a serpent.

150. While trying to reach for something of value, she lost what she had under her arms.

151. A close friend can also become a close enemy.

152. A knife will not cut another knife and a cheat will not cheat another cheat.

153. A cow gave birth to fire and she wanted to lick it, but it burned her, she then wanted to leave it, but she could not because it was her own child.

155. A bird hanging between two branches will get bitten on both wings.

10 of the Best Ethiopian Traditional Sports and Games

20 Of The Best Poets And Poems of Ethiopia (Qene included)

30 Must Know Facts About The Ethiopian Tewahedo Orthodox Church