Wedding Traditions Of The Amhara People 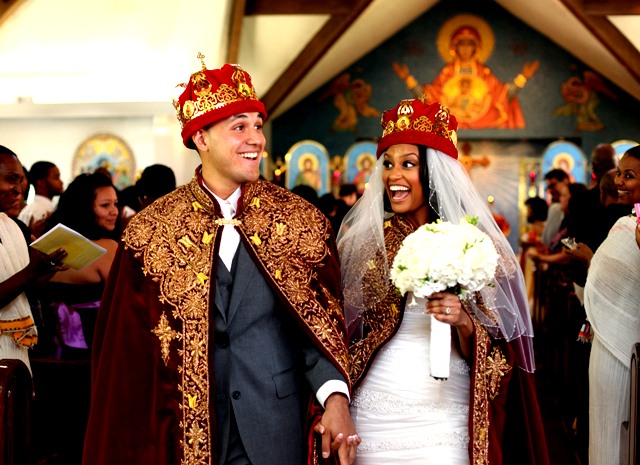 The Amhara people of Ethiopia, found in the northern and central highlands, account for approximately 27% of the country’s population.

They are one of the most politically and culturally powerful ethnic groups in the country and their wedding traditions are a unique celebration of their culture.

In this region, women can marry once they turn 14 (the groom may be roughly five years the bride’s senior). In fact, the Amhara people have Ethiopia’s lowest average marriage age ever at 14.7 years old.

The Main Types of Amhara Wedding

Amhara weddings typically conform to one of three types of ceremony: a Eucharist church marriage, a kin-negotiated civil marriage, or a temporary marriage.

In general, the ceremonies typically take place in a large, appropriately decorated hall or auditorium — as usually chosen by the parents of the bride and groom.

Christianity is the dominant religion in the Amhara region and virginity is valued highly within the religion. So, naturally, the bride and groom are expected to be pure before the marriage takes place.

The most common marriage for the Amhara people is a kin-negotiated civil marriage.

Initially, for this type of marriage, the parents of the couple make negotiations on their children’s behalf.

A civil wedding ceremony is then conducted with a priest who blesses the couple. In the past, if the husband violated this marriage oath, he’d be fined 80 Maria Theresa thalers.

Divorce is permissible and involves negotiating both child custody and the division of property.

A Eucharist church marriage (Qurban) is only typically for certain people, such as, royals, priests, and elders.

This marriage doesn’t allow for divorce. Widows and widowers are permitted to remarry, however.

Damoz marriage is deemed necessary if a man is travelling away from home in an area without restaurant or hotel services. The marriage ceremony involves an oral contract before witnesses.

When it comes to the food, you can expect to see plenty of spicy dishes primarily meat- and vegetable-based at Amhara weddings.

Traditionally, guests do eat raw meat. However, today it’s much more common for Ethiopians to opt for their meat to be cooked.

Lamb, chicken, and beef are the most popular meats, while pork is not usually consumed. Additionally, fresh injera, a spongy sourdough flatbread, is often enjoyed by guests.

As for drinks, tej, a mead or honey wine, is often served at Amhara weddings.

Tej is made from the powdered leaves and twigs of the gesho plant, a bittering agent similar to hops.

This involves lighting a fire and roasting green coffee beans over it before grinding them down with a mortar and pestle.

The resulting grounds are then used to make a pot of fresh coffee (in a vessel called a jebena).

Once the coffee has brewed to the appropriate strength, it’s served to the guests — usually alongside kolo (cooked whole-grain barley).

Wedding anniversaries are often just as important as the wedding ceremony itself.

In the Amhara region, it’s custom for the husband and wife to exchange gifts to commemorate the day.

Iron represents stability, endurance, and strength, which makes it a fitting wedding anniversary gift. Additionally, it’s custom for the Amhara people to have an animal slaughtered to celebrate the day.

Amhara wedding traditions are a beautiful display of their vibrant culture. They’re a truly special event to witness and even participate in.

The Best Ethiopian Wedding Songs/Music for 2022